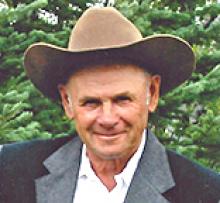 It is with great sorrow and heavy hearts that we announce the sudden passing of our beloved husband, father, grandpa and great-grandpa, Gordon DeFoort, on November 23, 2019 at the age of 81 years. He passed away doing what he loved most.
Gordon was predeceased by his parents, Harry and Madeline, in-laws, Ed and Violet Gosselin, son Walter, and sister Judy.
Gordon will be greatly missed by his loving wife of 56 years, Frances; sons, Lawrie and Dennis; grandchildren, Dustilee (TJ), Desmond (Meghan), Shelby (Quentin), Colby, Carter and Donovan; great-grandchildren, Brendan, Josh, Aiden, Abel, Aarron, Lily, Kasey, Chase, Bostyn, Xander and Remi; sister Margie, along with many more family and friends.
Gordon was born in Winnipeg, MB. He was the oldest of three children where they grew up on the family dairy farm in Giroux, MB. In his younger years, he was a mechanic and also did some roofing. Gordon met his loving wife Frances and were married November 30, 1963. They moved to Ashern, MB and started their little family.
One of Gordon's greatest passions in life was his love for horses. It all started when he was young and working at rodeos, horse shows and with race horses. Gordon had many different kinds of buggies. He never missed a local parade and never turned down a wedding. Gordon passed down his love for horses to all three of his sons who continued to do as he did and help him along the way.
Gordon took on his love for trucking at a young age where he worked for many different companies. In 1988 he bought his first business from Steven Johnson and St. Martin Transfer and started DeFoort Livestock Transport. Gordon travelled many miles over the winter roads, throughout Manitoba and Ontario. He took a lot of pride in growing the family business with his wife, sons and grandson to make it what it is today.
Gordon also had many other hidden talents such as working with leather. He has made many belts through the years and it was his goal to finish a set of chaps. He also had a knack for woodworking and made canes from diamond willow. Gordon also made other little projects with wood.
The family would like to extend thanks to all his loyal customers and employees, and are looking forward to continuing doing business with you.
In keeping with Gordon's wishes, cremation has taken place.
His family invites everyone to a gathering to celebrate Gordon's life at 1:00 p.m. on Saturday, December 7, 2019 at the Ashern Centennial Hall with Dawn Tober officiating.
In lieu of flowers, donations may be made to the Ashern Rodeo Board Inc., P.O. Box 777, Ashern, MB R0C 0E0.