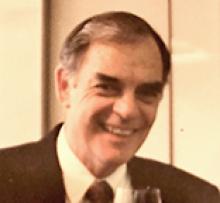 On November 25, 2019, Alexander Everett Rattray passed away in his adopted city of Bassano del Grappa, Italy.
He will be deeply missed by his loving wife and partner, Angela Luvera Rattray; daughter Jennifer Rattray, husband Stacy Dainard and grandson Tristan; daughter Alexandra Rattray; brother Donald Rattray and family, and many friends, colleagues and former students around the world.
He was predeceased by his parents, G. Wilson and Holly (Forster) Rattray.
The world will be a little smaller without him. Alex was principled, creative, enthusiastic and intelligent - a gentleman and a gentle man who recognized the similarities in our natures rather than the differences. Born in Winnipeg of Scottish heritage, he was raised in St. James and Fort Garry and attended Viscount Alexander High School before earning a Bachelor of Architecture degree at the University of Manitoba. After receiving one of the first Canada Council Fellowships in landscape architecture, he pursued a Master of Landscape Architecture degree at the University of Pennsylvania, winning the School of Fine Arts Award. On graduation he accepted a position with the Boston and Worchester Redevelopment Authorities before becoming chair of the Lowthorpe Department of Landscape Architecture at the Rhode Island School of Design. In 1969, he was invited by John A. Russell to return home to create and lead a program of landscape architecture at the University of Manitoba.
Despite opportunities at universities including Berkeley, Alex was committed to Winnipeg, the Prairies and his students, choosing to spend his career at the University of Manitoba where he was a gifted professor with a passion for the living landscape, process and design, and accessible public space. He and Angela were co-directors of the Italian Studies Program, and for a decade they introduced students to the history, culture, art, architecture and landscape of the Brenta Valley region. On retirement, he was named a Senior Scholar and then a Professor Emeritus, in recognition of his distinguished service.
Alex's natural curiosity led him to explore the world, visiting, lecturing and teaching in countries from India to Indonesia. He was a Visiting Professor at the Universities of Edinburgh, Melbourne, Toronto and New Mexico, and an Advisory Professor at the Chongqinq University of Architecture and Engineering and at Southwest Jiaotong University. He encouraged international students to study at the University of Manitoba, helping them to find housing, and picking them and their families up at the airport in his 1968 Mustang so that after a long and sometimes harrowing journey, they were warmly welcomed to Canada.
Alex was President, a Fellow and Life Member of the Canadian Society of Landscape Architects, receiving the President's Award of Excellence. He was President and a Charter and Life Member of the Manitoba Association of Landscape Architects and an advisor to the International Federation of Landscape Architects. He served on numerous national advisory boards and committees, including chairing the National Capital Commission's Advisory Committee on Design. He challenged his profession, his students and himself to be more responsive to the environment and to the community.
Much more than the sum of his professional achievements, Alex was a wonderful father who read Winnie the Pooh, The Chronicles of Narnia and Paddington Bear to his young daughters, took them tobogganing and skating at Assiniboine Park, helped them with school projects, organized home National Film Board film festivals complete with tickets and popcorn, and supported them throughout their lives in every way possible. He was a devoted grandfather never too busy to play school or restaurant or watch Tristan play hockey or soccer. He regarded his son-in-law as a son. He volunteered on parent councils, church committees, the University of Winnipeg Community Renewal Corporation and with the Parkinson Society Manitoba.
In addition to his family, friends and profession, Alex loved reading, politics, sports, sailing, northern canoe trips, classical music, Scotch whiskey and Welsh corgis. And one of his favourite projects was one of his first, a small park designed with neighbourhood children in Providence, Rhode Island. After bringing their ideas to life, the children described their enchanted garden:


"The garden was created when a star fell and
all the pieces became bits of the garden. It is
the power within the star that made the
garden magic ... Whenever everyone enters
the garden they become playful."

With Alex's passing, we like to think there
is one more twinkling star in the sky.

A funeral service was held this week in Bassano del Grappa, Italy.
Thank you for the many messages of condolence from friends, colleagues and former students noting Alex's profound influence on their lives, the value of his mentorship, and his impact including from the l'Istituto Universitario di Architettura di Venezia.
If you so wish, donations may be made to the Alexander E. Rattray Scholarship in Landscape Architecture at the University of Manitoba. Gifts may be made by calling 204-474-9195 or online at: give.umanitoba.ca or sent to the following address: Alumni and Donor Relations, 200-137 Innovation Drive, University of Manitoba, Winnipeg, MB R3T 6B6. Cheques can be made payable to the University of Manitoba.