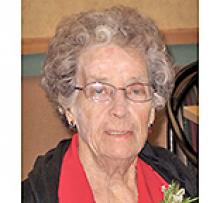 
Clara Olive Elizabeth Barkley went home peacefully to be with her Lord and Saviour Wednesday evening, November 27, 2019 at Beacon Hill Lodge.
Clara was born in Reston, Manitoba on December 16, 1926. She moved to Portage la Prairie in the early 1940s and attended Portage Collegiate Institute. Clara met the love of her life, Albert Barkley in high school. They were married in 1947 and were married for 67 years. Clara was employed as a seamstress for a number of years until she became a full-time mom in 1951. Clara was a member of First Baptist Church in Portage la Prairie for over 70 years and was in many choirs, as well as being a piano accompanist for many years. She also belonged to the Women's Christian Temperance Union for many years. Clara was also an avid gardener, animal lover and was a five-pin bowler for many years. She reportedly came within one pin of a perfect game.
Her primary passion was being a mom and wife. She taught family values and the importance of family to her three sons. As years advanced and dementia became a part of her life, she couldn't always remember the many family names, but was always interested and took pride in hearing about family developments and activities. She also developed skin cancer and had numerous radiation treatments in the last two years. In spite of the dementia, she retained a very positive outlook and her care staff at Beacon Hill Lodge often remarked about her cheerful demeanour.
Clara left to mourn her three sons, Brian (Brendene), Doug (Rachel) and Barry; grandchildren, Blair (Ryann), Beth, Christopher (Amber), Kevin (Deborah) and Melissa (Steve); seven great-grandchildren; sister-in-law Shelagh Cabana (Denis) of Montreal; as well as nieces and nephews, and their families. Clara was predeceased by her mother Melissa Gardiner; father Lorne Gardiner, husband Albert and six siblings; Gertrude, Irene, Janet, Amos, Howard and Beatrice.
Her funeral service will be Saturday, December 7 at 1:00 p.m. at First Baptist Church, 102 3rd Street SE, Portage la Prairie, with viewing prior to the service. Interment will follow the reception at Hillside Cemetery.
As expressions of sympathy, if friends so wish, donations may be made in lieu of flowers, in Clara's memory to CancerCare Manitoba Foundation or Alzheimer Society of Canada.