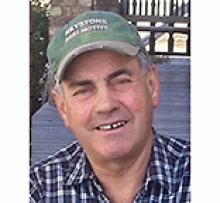 
It is with great sadness that we announce that Marcel Florent Gilles Joseph Raffard, 69 years of age, passed away suddenly on November 26, 2019, on his farm.
He is survived by his beloved wife Eleonora and their children, Christian, Lynda (Reg), Richard and Matthew (Carlin); sisters, Dolores (Gilbert) Carrière, Lorraine (Bob) Cauthers, Evelyne (Pierre) Beaudoin, and Jeanine (Adrian) Bernard; brother Michel; grandchildren, Karina, Zander, Marianne, Liam, Isabella, Lucas, Nora, Cédric, Alyson, Morgan and Parker; sisters-in-law, Lorena and MaryLou; brothers-in-law, George and Will (Susan) Scheiring; as well as many nieces and nephews.
Marc was predeceased by his parents, Marcel and Yvonne (Grandmont) Raffard; brother Denis; granddaughter Emily; niece Rachel; nephew Carey; niece Marie; parents-in-law, George and Adele Scheiring.
Marc was born in St. Boniface Hospital, the year of the "Famous Flood of 1950." After graduating from St. Pierre High School, he earned his Diploma in Agriculture at University of Manitoba. He met Ellie at the German Club in Winnipeg, in 1972 and married his soulmate on July 20, 1974 in St. Alphonsus Roman Catholic Church in East Kildonan.
Using Ellie's hard earned "Holiday Funds", they bought three Registered Holstein heifers from brother Albéric of the St. Norbert Trappists and five more heifers from Miami, MB. Eventually they built a barn, increasing their milking herd to 28, housing an extra 12 heifers until 2005. Meanwhile they were also grain farming with Marc's father and brother Denis until they bought their own equipment in 1976, slowly establishing their independence. They quickly found out they needed help, and within the next eight years, had their family of four children.
Throughout the years, Marc was a strong defender of agriculture by being involved as a delegate for Manitoba Pool Elevators and as an active Director for KAP for 35 years. He was a councillor for the R.M. of De Salaberry for one term of four years. He was a proud agvocate in both English and French to the local media, and stayed up-to-date on anything that had to do with farming nationwide.
Marc enjoyed his time with his grandchildren, taking family trips, camping, and curling, was a member of the Otterburne Roman Catholic Church and belonged to the Knights of Columbus.
Strong, determined, and focused, Marc cared for and took pride in his family and his farm. An ambitious man, he attained fulfillment from his accomplishments. No matter how busy life got, he always found the time to help neighbours and friends. To Marc, farming wasn't work. His saying was "It's only work if you don't enjoy it!" He was well known for his clever wit and his sharp sense of humour. Marc was a devoted husband to Ellie for 45 years and a loving family man.
Funeral mass will be celebrated by Father Alain on Wednesday, December 4, 2019 at 1:00 p.m. in the Parish / Paroisse St. Viateur Roman Catholic Church in Otterburne. Interment will follow in Otterburne Roman Catholic Cemetery.
Special thanks to the attending paramedics and the St. Pierre-Jolys RCMP.
In lieu of flowers, donations can be made to Paroisse St. Viateur of Otterburne, 37 Main Street, P.O. Box 7, Otterburne, MB R0A 1G0.