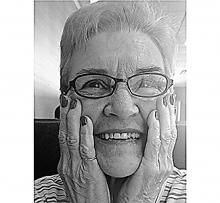 
It is with heavy hearts that we announce the passing of our mother, grandmother, great-grandmother, sister, aunt, cousin and friend. Gail passed away at the Health Sciences Centre on November 28, 2019.
Gail is survived by her daughters, Sherry Guttormson (Carl) and Christina Sayer; stepchildren, Paul McClinchey (Rose Marie) and Paula Henley; grandchildren, Shantel Laird (Michael), Michael Guttormson, Jeremy Henley (Amanda), Rachel Henley, Tara McClinchey and Mallory Hagen; great-grandchildren, Xachery, Xayden Laird and Vaughn Hagen; brother Donald Chester (Sally); sister Janet Miller (Scott); sister-in-law Wendy Chester; special friend Jana Repan; along with many nieces, nephews, cousins, friends and her loving dog and best friend Maggie.
Gail was predeceased by her husband Don McClinchey; parents, Leslie and Christine Chester; stepmother Annabelle Chester; and brother Lawrence Chester.
Gail was born on January 10, 1945 in Winnipeg, MB. She grew up in Winnipeg and later moved to St. Malo with her husband Don where they enjoyed quiet countryside / beach living and walks with her dogs. Gail moved back to Winnipeg in 2018. Gail worked at Nabisco Foods for many years.
A Celebration of Life will be held for Gail on Saturday, December 7, 2019 at 1:00 p.m., in the chapel of Voyage Funeral Home, 220 Hespeler Avenue at Henderson Highway in Winnipeg, MB.
In lieu of flowers, donations may be made to the Winnipeg Humane Society in Gail's name.