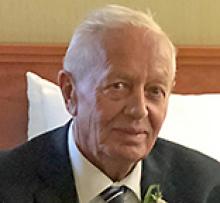 With deep sadness, with his family by his side, we announce the passing of Bert Boonstra, father, grandfather, uncle and friend.
He leaves to mourn his children, Kim (Vince), Rob (Tammy), Brian (Jackie); 10 grandchildren, Jenna (Erik), Stephanie (Nolan), Jonathan (Taylor), Emily, Chelsea, Jodie, Chantal, Madeline, Gerrit, Thomas; great-granddaughter Emery; sister-in-law Pearl Boonstra, brother-in-law Ernie Boklaschuk; numerous nieces and nephews and many friends.
Dad was predeceased by his wife Janis; parents, George and Pearl Boonstra; in-laws, John and Muriel Swinton; sisters, Anne Haarsma and Grace Boklaschuk; brother Carl Boonstra; brother-in-law John Haarsma.
Dad was born June 12, 1942 and lived his entire life on the farm in Meadows. The youngest of four children, Dad grew up in a loving home where life revolved around the farm. He played hockey and baseball as a teenager, bought a 1200 cc Harley Davidson when he was 15, loved fishing, earned his pilots license and loved flying his plane that he owned together with Grant Johnson. Dad enjoyed coaching hockey and baseball in Warren and spent many years volunteering at the Meadows Community Club which he loved to do.
Dad and Mom were married just over 50 years when she passed away in 2016 and life for him would not be the same without her. They had a wonderful life together travelling with friends, raising their family, and farming alongside Uncle Carl and Auntie Pearl. In his later years, he loved to help out on the farm with his family and grandchildren. Dad could usually be found on the seeder, baler, swather or packing silage. His experience and quiet determination will be missed immensely. Dad took great pride in his yard and garden, and he would make his rounds with his gator bringing water to the places that needed it and sharing his produce with any of us that wanted it.
Other than Mom, Dad's love was his grandchildren. Attending their sporting events and school programs, he loved each one in a special way. He always had a cupboard full of candies, chocolate bars, and his homemade butter tarts ready for any of them to come over and watch Jets games, CNN or old war movies with him.

We will miss you immensely Dad, but
it's time to go home to be with Mom,
and your brother and sisters.
"Grampa we will miss you."

Cremation has taken place, a memorial service will be held on Friday, December 6, 2019 at 2:00 p.m. at the MacKenzie Funeral Chapel, Stonewall. A private interment will be held at the Warren Cemetery.
In lieu of flowers, if friends so desire donations can be made to the Meadows Community Club, P.O. Box 29, Group 40, Marquette, MB R0H 0V0.