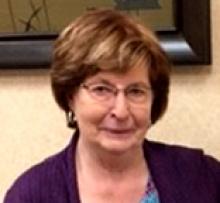 It is with deep sadness that we announce the sudden passing of our beloved wife, mother and grandmother, on December 1, 2019, at the age of 84.
Inga is lovingly remembered by her husband Herman Weik, her son Douglas (Heather), and her daughters, Laureen and Leslie (Diego); her grandson Luke and her granddaughters, Tanya and Anika; her sister Audrey (George) and brother Arnim; as well as her many in-laws, nephews and nieces.
Born in Winnipeg, Inga moved to Grahamdale, MB as a child where she was raised. She later returned to Winnipeg to attend high school and Teacher's College. She taught in a number of areas throughout the Interlake including Howardville, Riverton, Gimli and Arborg. Inga was a strong believer in the value of education and hence continued her schooling obtaining her Bachelor's and a Master Degree in Education, specializing in learning and reading disabilities. She finished her career as member of the Reading Clinician Association of Canada working as a reading clinician in a variety of Winnipeg school divisions. Inga was a dedicated teacher and enjoyed helping and tutoring others; she was a long standing volunteer at Riverdale Place Homes for the mentally challenged as well as the Ardal-Geysir Lutheran Church. Inga appreciated and enjoyed the arts and was an active member of the Manitoba Theatre Centre as well as a number of book clubs. She also took up painting later in life. Her paintings can be seen in a number of homes as well as in her own home, by the lake, Vatshild, Hnausa, on Lake Winnipeg.
A celebration of Inga's life will be held on Friday, December 6, 2019 at 12:00 p.m. at the Ardal-Geysir Lutheran Church, in Arborg.
In her memory, in lieu of flowers, donations can be made to the Ardal-Geysir Lutheran Church.

You will be missed Inga.