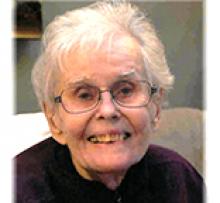 
Maria, our mother, grandmother and great-grandmother passed away peacefully on Wednesday, November 27, at the Health Sciences Centre.
Maria was born in the village of Korowycia Sama in western Ukraine. She was predeceased by her husband Walter; parents, Anthony and Katryna Rudnick; brother Joseph; sisters, Anna and Julia; daughter-in-law Vionna Hladky; and grandson Aron Koel.
During the Second World War, at the age of 17, she was taken from her village to Austria where she worked for three years on a farm as a forced labourer. From there she left for Italy and England before immigrating to Canada in 1948. She married Walter who had grown up near her home village. Together they raised four children. They bought a home on Canora Street in the Wolseley area in 1955 and she lived there for 62 years. Maria delighted living under the canopy of trees and going for long walks with friends to Omand's Creek, which in her own words was like "a wolf drawn to the woods". Even into her early 90s, she often walked two miles to the store and back. She loved her home and it became the focal point of many memorable family gatherings.
Maria only had a grade 3 education in the Ukraine but she demonstrated a gift for learning the practical necessities of life. On her own, she became an accomplished seamstress. By studying her children's homework and looking at the newspaper, she taught herself to read and write in English. She increasingly learned to cook and feeding her family became her lifelong love language. Mom absolutely made the best perogies, piroshky and sauerkraut in Winnipeg. Each year she had a garden and her cupboards were always filled with preserves. She was also a 'health food advocate' well before anyone knew what that meant.
Mom's greatest love was her family and that all her children got along so well. When grandchildren started to arrive, she became affectionately known as Babunia, an endearing form of grandmother in Ukrainian. One of her fondest memories was that of the pitter patter of the little feet of her grandchildren running to wake up their Babunia and crawl into bed with her.
Mom will be dearly missed by her children, Joseph (Chris), Michael, Olga Koel and Helen (Derek) Shettler; her grandchildren, Stephen (Julie), Nicholas (Nadia) and Daniel; Joel and Anja; Tiiu and her dad Jaan and Matthew (Julie), Adam and Andrea; and her great-grandchildren, Nathan and Daniel and Leo, Rex and Arno and their mother Olympia.
The family would like to acknowledge the kindness, tender care and compassion given to our mother by the staff of the 5th floor at Lions Manor. It was greatly appreciated.
A funeral service will be held on Saturday, December 7, at 11:00 a.m., at Korban Funeral Chapel at 907 Main St. with interment to follow at Holy Family Cemetery.


It is with sad hearts that we announce the passing of Maria Hladky.
A funeral service will be held at Korban Funeral Chapel, 907 Main St. on Saturday, December 7 at 11:00 a.m.
Longer announcement to follow.