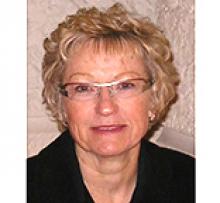 
Peacefully on December 2, 2019, surrounded by family, Friede passed away at St. Boniface Hospital.
She was predeceased by her parents, Elsa and Peter Peters; sisters, Louise (Fred) and Erika (Ernst) and brother Artur. She is survived by husband Rudy, daughter Marnie (Scott), son Christopher (Tabitha); grand-children, Sophie, Henry, Mila, Brooklynn, Sydney, Nikolas and Dakota; brothers, Peter (Kathy) and Nick (Susan); sister Elsie (Ernie) and sister-in-law Adina; as well as many nieces and nephews.
Friede was born February 12, 1947 on the South Atlantic aboard the SS Volendam enroute from Germany to South America. After spending 10 years in Paraguay and Argentina, the family immigrated to Canada making their home in Winnipeg. Friede graduated from River East Collegiate and later qualified as a Certified General Accountant. She retired as Controller of St. John's Music in 2007.
Funeral service will take place on Saturday, December 7 at 11:00 a.m., at North Kildonan Mennonite Church, 1131 Roch Street, Winnipeg. A private interment will be held prior to the service.
In lieu of flowers, donation to CancerCare Manitoba would be appreciated. Make a donation to