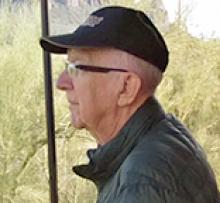 
Our beloved father, Edward Enns, passed away peacefully on November 28 while on holidays with his children in Mesa, Arizona.
Born to Isaac and Maria Enns (nee Bergen), Ed was predeceased by his loving wife, Elizabeth, and older brother, Bill, and is survived by his sister, Hilda (Frank) Zacharias; his children, Lois (Reuben), Eldo (Karen), Ruth (Dave), Lenore (Michael), Vernelle (Alfred) and Will (Lesley); 10 grandchildren and five great-grandchildren.
As the son of a high school teacher in the Altona area, Ed was schooled by his own father, a situation which, he recounted, had both its benefits and disadvantages. As country children, he and Hilda were keenly aware of the distinct privilege they had, spending their summers with relatives in Winnipeg, where their father upgraded his teaching certification; Ed used to recall their delight in exploring this exotic new world. After brief stints working at his parents' rural bakery and a local general store, Ed moved to Winnipeg as a young man, where he completed high school, became a member of Bethel Mennonite Church, and, most importantly, met his life partner of over 60 years, Misericordia nursing student Elizabeth (nee Enns).
As a young couple, Ed and Elizabeth worked at Bethel Bible Institute in Abbotsford, BC, as well as several Bible Camps, including Assiniboine and Vanderhoof, BC. A graduate of Canadian Mennonite Bible College, Ed continued in his father's footsteps, accepting a teaching position at Rosthern Junior College, Saskatchewan. In 1964, Ed accepted a ministry position at First Mennonite Church, Saskatoon, working in partnership with the esteemed J.J. Thiessen. In 1971, Ed accepted a ministry assignment at Grace Mennonite Church, St. Catharines, while simultaneously completing his master's degree across the border in New York State.
Ed accepted a position with the Canadian Conference of Mennonites in Winnipeg, in 1976, where he was responsible for Conference administration including assigning pastors to congregations across Canada. This responsibility carried the traditional designation of "Bishop", or more currently "Overseer". Never ones to settle into comfort for very long, Ed and Elizabeth accepted a unique two-year ministry assignment in Bielefeld, Germany, where they supported new German Mennonites recently resettled from Russia, many carrying scars and trauma of the Second World War, whose stories Elizabeth would later document in a collection. Upon returning to Winnipeg in 1985, Ed was offered his final ministry assignment at North Kildonan Mennonite Church, where he and Elizabeth once again made many dear friends.
Retirement opened the door to Ed's "second career" as one of the province's foremost translators of handwritten German Gothic script. Ed received recognition for deciphering many complex handwritten documents for the Mennonite Archives for over 20 years, greatly enriching the storied heritage of his people.
Our dad was a modest, quiet man who, true to his convictions, dedicated his life to helping "the meek and the poor." His leadership style was marked by sincere humility and patience, characteristics that may, as of late, seem to fall into the realm of misty nostalgia. We marvelled at how he could speak to an audience of a thousand in his steady reassuring voice, as effortlessly as addressing one of his many grandchildren.
A special debt of gratitude is owed to Ruth and Dave, who took Dad into their own home, offering him the finest care imaginable. Enduring the hardships of old age with dignity, his final lament was that he could no longer consistently remember the countless names of people who adored him through the many chapters and settings of a rich life. To all those, rest assured that even if our Dad, in his advanced years, could no longer put a name to your face, he still loved you!

"Well done, good and faithful servant.
You have been faithful over a little;
I shall place thee over much;
Enter thou into the joy of thy Lord."