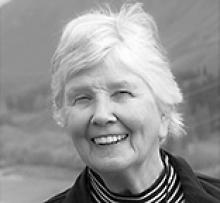 
Peacefully on November 24, 2019 Joyce Ward passed away.
Joyce leaves to mourn her three children, Catherine, James and Peter, their spouses, and five grandchildren, Thor, Brigit, Mikhail, Nolan and Elise. Also mourning her is her younger sister, Shirley.
Her beloved husband, Fred, died in 2013.
Joyce grew up in West Vancouver, BC. Pictures from that time show a giant smile and a sense of style - neither faded over the years. Joyce loved a good laugh and continued to find humour even through her final days - a kind health care aide served Peter a cup of tea while he kept her company at the hospital - when it turned out that the tea was made with broth rather than water much to Peter's surprise, Joyce still chuckled at the mix-up.
A teacher by training, Joyce married Fred Ward in 1955 and in this partnership found herself in a life of adventure and travel. When Fred proposed a sabbatical in Japan in 1970, she gamely packed up her young family and away they went. She repeated this pattern to live in Fiji five years later and to New Zealand five years after that. She made friends all over the world, immersing herself in the local communities and exploring, with Fred, all there was to offer.
In their retirement, travel continued: repeated trips to New Zealand, excursions to Australia, Cuba, the Cook Islands, Thailand, India, Turkey, Egypt and the UK among other destinations. She and Fred travelled extensively throughout western Canada, usually to enjoy the outdoors.
Joyce was an accomplished cook and a gracious hostess. It gave her great joy to have friends over for a delicious meal, lively conversation and many laughs. For the last eight years, Joyce lived in Lindenwood Manor where she discovered a new community of friends who filled her days with support and companionship. A lifelong knitter, Joyce took delight in creating the whimsical creations that decorated her door ledge and put a smile on the face of her neighbours. She also knitted many items for charity, keeping children and adults warm in the Winnipeg winter.
Joyce took great pride in the accomplishments of her children and grandchildren and embraced the technologies that allowed her to keep in touch with them, no matter where they were.
Cremation has taken place and there will be no service.
We would like to thank the staff of Misericordia Health Centre (Cornish 2) for their kindness to Joyce and her family during her last month.
If you would like to make a donation in Joyce's memory, please consider Doctors Without Borders or Siloam Mission.