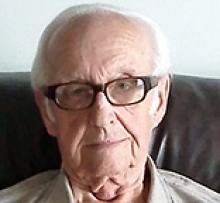 After living in the city of Winnipeg for over 90 years, Allen passed away peacefully at Donwood Manor.
He is survived by his wife Dorothy, children, Clyde and Marla, son-in-law Jeff, grandchildren, Kailey (Brian) and Shane (Katharine), great-grandchild Reid, brother Marvin, nieces and nephew, and close friend Hedy Mielke and her family.
Allen was proud to have grown up in the North End of Winnipeg. Shortly after he and Dorothy married, they moved to East Kildonan to raise their family. Allen was employed as a Winnipeg police officer for 34 years. He and Dorothy were married for 58 years and enjoyed spending time with their family, friends and neighbours - both at their home and cottage at Granite Lake. There were trips to Hawaii, Florida and Arizona that made the Winnipeg winters a little shorter. After he and Dorothy separated, Allen moved to Sarina Towers and later River Ridge. In his later years, he enjoyed spending time with Hedy playing dice and card games, taking drives in the country and walks in the park, and going to church.
His final six months were spent at Donwood Manor. The staff of River Ridge and Donwood Manor made Allen's final years enjoyable, despite his failing health, and he appreciated each person who assisted him to his final day.
Allen will be cremated and then laid to rest at Glen Eden Memorial Gardens on Main Street at a private service with family and close friends in early May 2020. As he requested be engraved on his burial stone the phrase "It is finally over", his long journey ends, but as he believed a new one begins, may it be one of peace and tranquility.