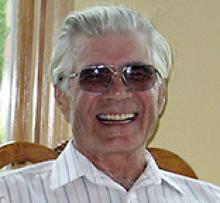 
Peacefully, on Tuesday, December 3, 2019, Harry passed away in his sleep, aged 93 years.
He is lovingly remembered by his wife Gwen; his children, Brian, Catherine (John), Betty (Brian) and Kelly (Laura); cherished grandchildren, Jared (Jade), Joshua, Holly (Steve), Lindsay (Chris), Adam, Danielle (Matt) and Rebecca; great-grandchildren, Keiran, Taeven, Lily and Aven. He is also survived by stepchildren, Colleen Conrad (Bobby), Robert MacDonald, and sisters-in-law, Betty Hird and Anna Stewart, as well as numerous nieces and nephews.
Harry was predeceased by his parents, Annie and Thomas Gowryluk; his siblings, Nettie, Bill, Mary, Olga and Jenny; and his first wife Eleanor.
Harry Gowerluk was born on June 19, 1926, and was proud to have lived his entire life on the family farm his parents homesteaded over a century ago in Kirkness, MB.
He worked several jobs as a young adult including lumberjacking and a very short stint at the Manitoba Rolling Mill. He eventually took up plumbing as a trade and and it was in this field that he spent the balance of his professional career. He worked as plumbing foreman on many large, commercial buildings in and around Winnipeg.
His work ethic and attention to detail allowed him to later become a Plumbing Inspector with the City of Winnipeg. He was assigned the downtown area of Winnipeg, where Winnipeg's largest construction projects were taking place. He retired as Assistant Chief Plumbing Inspector, having passed up the opportunity to become Chief Plumbing Inspector so as not to spend his days behind a desk! Throughout his life he also kept the family grain farm going in the summer time.
It was during his early plumbing years that he met Eleanor Kruse from the Weston area of Winnipeg. They married in 1951 and eventually built the family home where they raised their children, Brian, Catherine, Betty and Kelly. Harry would regularly entertain the entire family with his harmonica. Harry and Eleanor enjoyed many years together golfing, curling and dancing, plus regular winter getaways to Hawaii until Eleanor's passing in 1990.
Harry belonged to the Selkirk Golf Club for almost 40 years. During this time, he spent a period on the Board of Directors and used his construction expertise to help oversee the building of the new clubhouse. As a golfer, a good, short game allowed Harry to almost shoot his age several times when he was about 80 years old.
Harry loved curling even more than golf. He was a member of the Selkirk Curling Club for over 40 years and was made an Honorary Life Member in recognition of his countless hours of volunteer work. He was the 1991 Manitoba Masters Men's curling champion and in 2009 was presented the Manitoba Curler of Distinction Award by the Manitoba Curling Association. He was still curling four times a week and helping run the Senior's League at the age of 89.
After his first wife passed, he married Gwen MacDonald in 1992. They carried on Harry's love of golfing, curling, Old Tyme dancing and travelling to Hawaii, Texas and from coast to coast in Canada. They enjoyed making wine and always kept a well stocked cellar.
Harry was an amazing father and grandfather. He adored his grandchildren and was so proud as he watched them grow. This resulted in many fun-filled, and at times, unconventional family gatherings. Getting the family together to enter floats in the Selkirk Parade and having winter cookouts in the bush brought the biggest smiles. He loved being surrounded by his family and we loved being with him.
The family would like to thank the staff at Tudor Home for the care and kindness shown to Harry.
A private service will be held.
In lieu of flowers, donations can be made to the Winnipeg Humane Society, the Selkirk Curling Club or the charity of your choice.