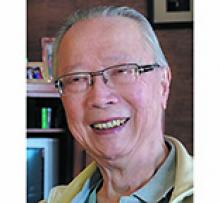 It is with heavy hearts that we announce the sudden passing of Don Wing Ong on Friday, November 29, 2019 at St. Boniface Hospital, at the age of 91. He had been in failing health for the last year but stoically carried on with the hope that he could reach 93 - the age of his two sisters on their passing.
He was predeceased by his only son, Dr. Bill Yuk Ong, in March of last year.
He leaves behind his devoted wife, Kwan (Anne) Ong, daughter-in-law Dr. Virginia Fraser, grandson Dr. Edmund Ong, grandson Thomas with wife Nettie Rempel-Ong and his beloved great-granddaughter Tirzah Hope, as well as extended family in Canada and the USA, and many friends and acquaintances.
Don was born in China July 1, 1928. He regaled his family with stories of his childhood, time at boarding school, and move to Hong Kong leaving his wife and young son behind. He immigrated to Canada November 13, 1952 initially to join one of his older sisters and her family in Portage la Prairie, working at Jimmy's restaurant. He was followed by his parents in 1957.
Don obtained his Canadian citizenship February 21, 1958. His wife and son were able to get to Hong Kong safely and though he made two trips back to Hong Kong to be with them, it took until February 1964 before he could be permanently reunited with them when he was able to bring them to Canada. By that time he had moved to Winnipeg for more opportunities working in the hospitality industry, initially at Chan's Café followed by 15 years at the International Inn.
He initially settled his family in a walk-up rental on Arlington Street, then into their first home on Beaverbrook Street in 1966. They subsequently settled into Waverley Heights in one of the first new homes being built there.
One year following his son's marriage, the two households combined and Don and Anne took on the running of the household while his son and daughter-in-law worked long hours. Two grandsons gave them plenty to look after during the day and were his pride and joy. His green thumb and his baking abilities were legendary within the family. Even last week he was fussing abut whether he would make his sugar plums for his Christmas gift to the immediate family - always in the same boxes each year.
The family would like to thank the Fire and Paramedic Service, Winnipeg Ambulance Service and the folks at St. Boniface Angio Suite for their amazing care of Don, along with their support to the family.
Flowers are gratefully declined. If friends so desire, donations can be made to the Heart & Stroke Foundation or the Assiniboine Park Conservancy.
A Celebration of Life reception will be announced in June.
For online condolences please log on to Thomson "In the Park" Funeral Home, www.thomsoninthepark.com