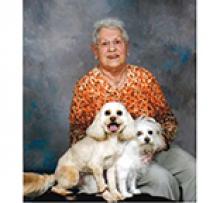 It is with deep regret that we announce the death of Marie Mandryk who passed away on Friday, November 29, 2019 in Winnipeg, Manitoba at the age of 82 years.
Beloved wife of the late Edward Mandrake (Mandryk).
Marie is survived by her daughter Karen (Shawn); grandchildren, Tylor (Michelle), Lea and Ashley; sisters, Lucy of Roblin, Manitoba and Belle (Hank) of Brandon, Manitoba as well as numerous nieces and nephews.
She was predeceased by her husband Ed in 2010; father in 1973; mother in 1979; sisters, Anne in 1996 and Nellie in 2019.
Marie was born in Petlura, Manitoba to Michael and Paulina on June 4, 1937. In 1949 the family moved to Roblin, Manitoba. She attended school in Roblin. Marie began her career working as a cashier for Safeway in Regina and Winnipeg. She later attended a Business College to upgrade her education after which enabled her to get a job as an administrative clerk in the office of Lucerne Foods, Egg Department. Marie also worked as an assessing clerk and reassessing officer at Revenue Canada Agency until her retirement in 2001.
Since Edward was in the military, he was relocated to Germany for three years. There they did some travelling to Holland, France and Italy.
Marie enjoyed spending time with her grandchildren and was very proud of their achievements.
On Wednesday, December 11, 2019 Marie's funeral service will be held at 11:00 a.m. in St. Andrews Woodhaven Anglican Church, 2700 Portage Avenue with Rev. Jim Kirkpatrick officiating.
Donations can be made in Marie's memory to the Heart & Stroke Foundation, CancerCare Manitoba, The Winnipeg Humane Society or to a charity of your choice.