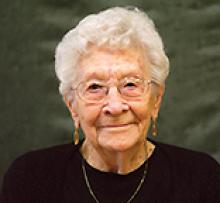 
It is with great sadness we announce the passing of our much loved mother, grandmother on November 26, 2019.
She leaves to mourn and cherish her memory her son Jerry, daughter Elizabeth (Liz) and grandsons, Jesse, Aaron and Eric Lielke, as well as grandson's mother Sheilagh.
She was predeceased by her parents, Dr. Everett and Grace Branion, in 1964 and 1971, and her beloved husband Arnold, in 1978.
Audrey was born in Saltcoats, Saskatchewan and spent her early years there leaving to enter training at St. Boniface General Hospital in 1938. She graduated in 1941 and worked at St. Boniface, Pine Falls Indian Hospital, Yorkton Hospital and Foam Lake Hospital. In 1941, she also remembers that she was the first person to administer an antibiotic to a patient in St. Boniface Hospital.
Audrey and Arnold were married in 1945 in Pine Falls while he was still in the Navy. They settled in Transcona, Winnipeg and Audrey returned to work at St. Boniface Hospital in 1983. From 1991 to 2015 Audrey resided at East Park Lodge.
Her greatest time was spent working for and enjoying membership in Confidence Rebekah Lodge #40 as Noble Grand and District Deputy President. She also enjoyed U.C.W. at Transcona United Memorial Church and was Secretary of The Afflicted Children's Fund and Treasurer of Past Noble Grands Association, as well as the President of East Park Lodge.
Her grandsons were her pride and joy and in their early years she spent much time looking after them. She and Arnold and nine month old Jerry moved to Chicago in 1950 and returned to live in Transcona in 1960. Her three great joys were her church, her Lodge and bowling twice a week.
Her last years were spent at Park Manor Personal Care Home where they took wonderful care of her.
A memorial service for Audrey will be held on Monday, December 9, 2019 at 1:30 p.m., at Transcona Memorial United Church, 209 Yale Avenue West.
In lieu of flowers, donations may be made to a charity of one's choice.