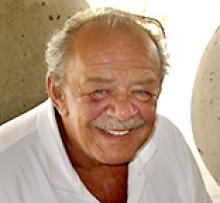 
Ronald Wilgosh passed away peacefully in Kamloops, British Columbia on December 3, 2019, aged 76 years.
He is lovingly remembered by his wife Marguerite, his daughter Christine, his son Daniel, his grandsons, Grant and Derek, and a large, extended family in Winnipeg.
Ron was predeceased by his parents, Joseph and Mary Wilgosh, and his brother Robert.
Ron grew up in Transcona, Manitoba and moved with Marguerite to Vancouver in 1965 where Christine was born. In 1968 he moved his young family to Kamloops where Daniel was born. He worked as a sales representative for Lance Bissett Limited for 30 years until he retired in 1998. Through his work, he was instrumental in much of the residential construction in Kamloops during that time. He loved Kamloops and the easygoing nature of the city and the people he chatted up wherever he went.
His greatest joy was his family and he proudly celebrated each of their achievements. He enjoyed taking them on vacations and made each one a fun adventure no matter the destination. Ron loved a great conversation and enjoyed sharing stories with his many friends over a cup of coffee. He was known for his quick wit, his infectious laughter and his kind and generous spirit.
A memorial service will be held on Thursday, December 12, 2019 at 1:00 p.m. at Schoening Funeral Chapel, 513 Seymour Street, Kamloops, BC.
Should friends desire, donations may be made to Marjorie Willoughby Snowden Memorial Hospice Home in Kamloops.
Ron's family expresses their deep gratitude to Doctors Bantock and Steyn and the physicians and staff at the Heart Clinic, ICU and CCU at Royal Inland Hospital. They are also extremely grateful for the compassionate care shown by the staff and volunteers at Kamloops Hospice.

Condolences may be expressed at: www.schoeningfuneralservice.com