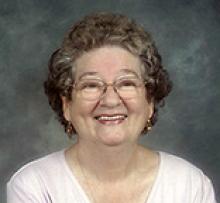 Roberta Griffin passed away peacefully on Tuesday, December 3, 2019 at Pembina Manitou Health Centre, with her daughter by her side.
Left to cherish her memory are daughter, Eileen (Rocky), Matt and Kaeleigh (Brock and Danica), Nick and Brennley (Brooke and Vaughn), daughter, Jeanne (Jim), Brianna and Eric Mager. She is also survived by her son, Rob's daughters, Keri and Kaleigh, and family, sister Eileen King and brother-in-law, Brian Pedden. Roberta was predeceased by husband Ross (1985), son Rob (2005), grandson Micheal (1982), brother Jack and sisters, Betty and Donna.
Roberta was born November 24, 1928 to Clayton and Lila Griffith, and raised at 320 Inkster Boulevard in Winnipeg. She was the second of five children (Betty, Roberta, Jack, Eileen and Donna). After Grade 12 graduation, she briefly worked at United Grain Growers before going into registered nurse's training at the Children's Hospital. Following her training, she worked in the operating room at Children's before venturing out to Morden Hospital. Roberta met the love of her life, Ross Griffin and was married December 5, 1953. They raised three children, Eileen, Rob and Jeanne on the Griffin Homestead. Roberta was active in the Darlingford community especially involved in Zion Calvin United Church. Roberta worked full-time at Morden Hospital, teaching the LPN program and then later Head Nurse of the Extended Treatment Unit. After her stroke in 1990, she retired and moved to Morden. She volunteered with various organizations. Roberta lived 25 years in Morden then moved to the Pembina Manitou Health Centre in 2016 and remained there until her death.
A Celebration of Life will be held at 1:30 p.m. on Tuesday, December 10, 2019 at St. Paul's United Church, 353 Thornhill St. in Morden with private interment at Knightcot Cemetery.
In lieu of flowers, donations may be made in Roberta's memory to the Pembina Parish, available at the church or to the Pembina-Manitou Health Centre.