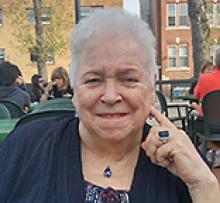 Gail Amy Huggins, aged 81, was peacefully reunited in heaven with her husband and the love of her life, Barry on December 5, 2019.
She leaves to mourn her children, Eileen, Colin (Lisa), Barry (Elaina); grandchildren, Gailene (Jeff), Kailey (Mike), Blake, Ainsley, Lauren and Brooke; and great-grandchildren, Conner and Taya; brother Mike (Leah); sister-in-law Maggi, who was one of her best friends; brothers-in-law, Wayne (Phyllis), Dennis (Antionette), Frank; as well as many nieces and nephews.
Predeceased by her husband Barry; her parents, Bob and Eileen O'Dowda; her brother Bob; her sister Jackie; sister-in-law Arlene and son-in-law Glen.
Gail was born November 13, 1938 in Winnipeg, Manitoba to Robert and Eileen O'Dowda. She and Barry married in 1958 and built their life in East Kildonan. While she was raising their three small kids, Gail worked as a secretary at St. Alphonsus School, where generations of her family attended. Later, Gail went on to work as a Magistrate with the Court of Queen's bench. It was there that she made many lasting friendships, especially with Bev and Carol who were more like family and the three continued to share many laughs and visits, even up until Gail's last day here on earth. Gail had a great sense of humour, always laughing and teasing those around her. Her greatest pride and accomplishment was her family. She was fiercely loyal and loved deeply. We take comfort in knowing she is reunited with her family and friends who have gone before her, she must have had quite the welcoming committee.
Prayers will be said on Tuesday, December 10, 2019 at 7:00 p.m. at Cropo Funeral Chapel, 1442 Main Street. Funeral service will take place on Wednesday, December 11, 2019 at 10:00 a.m. also at Cropo Funeral Chapel.
In lieu of flowers, donations can be made in Gail's memory to:

The Dream Factory at
www.thedreamfactory.ca