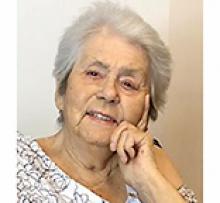 It is with deep sadness that we announce the passing of our mother, Oma, sister and friend, Anna on December 6, 2019.
Anna was born in 1928 in Almelo, The Netherlands to Hendrik and Gretchen Poortman. She is survived by a brother Roelof Poortman (Annie); brother-in-law Dan Imlah (Dot); sisters-in-law, Mary Ricard, Maybelle Playter, Josie Imlah, Simone Imlah and Sally Imlah; children, Wayne (Carol), Cathy (David), Rita (Aurele) and Jim; grandchildren, Chelsea, Chad (Heather), Brittany (Jonathon), Kayla (Jordan), Krystyn (Michael), Ash (Barret), Jocelyn (William), Riley, Jenna (Tieler) and Danton; great-grandchildren, Shayla, Curtis, Jayce, Brooke, Liam, Emma, Keanna, Mylee, Tessa, Chloe, Declan, Aria and Aceten, as well as numerous nieces and nephews.
Anna met her husband Walter in May, 1945, during the Second World War in Holland at a dance. They were married seven months later on December 20, 1945. In October of 1946, Anna made the journey to Canada to be with her husband Walter and lived and farmed in Fisherton, Manitoba. They had many adventures in their life including working as chefs on a train, running a successful drapery business (Custom Drapery), and being the first ever husband and wife pair to hold president status at the Royal Canadian Legion - Elmwood Branch No. 9.
They retired in 1988 to Fisherton, Manitoba and sadly Walter passed away January 24, 2002. Since that time, Anna lived independently on the farm until her health no longer permitted her to do so - as of December 2017. Anna was an incredible woman who had the kindest and biggest heart. She could often be found cooking for community events and family gatherings; sewing, knitting and crocheting. She spent countless hours cross-stitching Christmas stockings for every member of the family.
Funeral service will be held on Thursday, December 12, at 1:00 p.m. at the Fisher Funeral Home in Fisher Branch, MB. Interment at the Fisherton Cemetery.