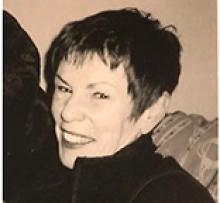 
Audrey passed away peacefully at Riverview Health Centre, in Winnipeg, at the age of 82. Her daughters were at her side.
Left to mourn her passing are her children, Colleen (Ron), Larry (Jing), Andrea (Jeff) and Paul (Tracey); her beloved grandchildren, Christopher (Pam), Jack, Daniel, Ethan, Nicholas, Scott, Ryan and Naomi; and her cherished cat Taz. She is survived by her sisters-in-law, Doreen and Heather; brother-in-law Len, and many nieces and nephews. Audrey will also be sadly missed by an abundance of steady and true friends, including Doreen, Helen, Jenny, Joan M., Marcia, Donna, Maggi, and life-long confidante and chum, Miriam.
Audrey was predeceased by her parents, John and Florence; brothers, Wally, Geoff and John; sister Shirley and ex-husband Gerry. She remained very close to the Cariou family throughout her life.
Audrey was born in Winnipeg and spent most of her formative years in Elmwood, graduating from Lord Selkirk High School and commencing her career path at Great West Life.
In 1958, Audrey married Gerry Cariou, and they eventually settled in East Kildonan to raise their four children. In 1972, the family moved to Brampton, Ontario. Once all four kids were in school full-time, Audrey re-joined the workforce at Sears. She spent many happy years there until an MS diagnosis necessitated an early retirement. She returned to Winnipeg soon after.
Throughout Audrey's life, she developed a richly-deserved reputation as the "hostess with the mostess", wowing guests with her culinary skills and razor-sharp wit, dressed to the nines all the while. Whether hosting people for a night of bridge or putting up a crowd of out-of-towners at the "McMurchy Arms", Audrey was the master of decor, menu, and ambiance.
As her disease progressed, Audrey was determined not to let her MS hold her back. She continued to entertain, travel and create hilarious and poignant memories. Her courage and tenacity were truly inspiring.
In 2018, Audrey was thrilled to move into the Old Grace Housing Co-operative in Wolseley. Though her time there was short, she reaped the benefits of a truly community-oriented environment. Our heartfelt thanks to so many members of the Co-op, especially Randa and KA, for their unwavering friendship and support.
Audrey's family would also like to extend our sincere thanks to all of the people whose efforts afforded our mom the ability to live independently for as long as possible; dear friends, Jamie G. and Wendy L., her home care workers, especially Josephina, Ashley and Melinda, her many physicians over the years, notably Dr. Brian Anderson, Dr. Reza Vosoughi, Dr. Ashvin Shah and Dr. P.G. Mehta; the palliative home care team, and the staff at Riverview Health Centre. They made a very difficult time more tolerable.
In lieu of flowers, a donation to the MS Society, the Riverview Health Centre Foundation or a charity of your choice would be greatly appreciated.
There will be a private Celebration of Life in Winnipeg in May.