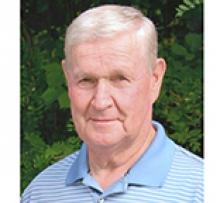 It is with much sadness that we announce the loss of Cameron Henry, of Oak River, from our lives. Cameron passed away suddenly on November 1, 2019 just after arriving at his winter home in Mesa, Arizona.
He was born September 26, 1944, the eldest child of Jean and Stan Henry of Oak River and brother to sisters, Lynn and Leslie. After completing his public schooling, he attended the University of Manitoba and obtained his Bachelor of Science in Agriculture. Lifelong friends were made during those years and he was proud to be part of the class of "66". He wore his Aggie hat proudly. It was there that he met his life partner, Denise DePauw of Treherne, who was taking her degree in Home Economics. They were married on July 26, 1969 and lived their 50 married years on the farm at Oak River. They became the proud parents of their two children, Scott in 1971 and Marnie in 1975.
Cam and Denise, along with his parents, grew the family farm and expanded the pedigreed seed business. His father was very pleased to have "and son" added to the J.S.Henry farm name. Cameron then had the privilege of having Marnie and son-in-law, Eric McLean, both agriculture grads from U of M, join him in the seed business 35 years later. It was with pride that he saw them expand the seed business and partner with many seed providers in the industry. He was equally proud to see his son, Scott, pursue a career in an agriculture research-related industry after obtaining his master's degree in plant science from U of M. There were lots of agricultural conversations over the years within the family.
Cameron was committed to being the best farmer he could be, valuing the land he worked, the pedigreed seed he produced and the customers he served. Over the years he has been a mentor, a teacher, and a learner. Always willing to share his knowledge and experience and having developed leadership ability, he became involved in agricultural organizations locally and provincially. He was a founding director and executive member of KAP and director and past president of the Manitoba Seed Growers Association. His involvement in these organizations led to many other related terms on cereal grain research committees and boards. He was proud to be named a Robertson Associate in 1996 by the CSGA as was his father before him in 1981. He would talk agriculture to anyone who was interested and never lost interest in what was new in that field.
Family was always a very integral and valued part of Cameron's life. He was a very proud grandpa of five grandchildren, Amber and Adam Henry, and Alexis, Elle and Duncan McLean. They will remember him for fun times at the lake, especially with the boat and for combine and quad rides on the farm. He was very proud of their developing skills in sports as he valued team play and knew its great benefits. There were also many special times spent with his nieces and nephews at the farm over the years; some even had their first work experiences there.
Cameron loved many sports, as a participant and as an ardent fan. Baseball and hockey were the sports of his youth, followed by curling and golf. In later years he added tennis and more lately, pickle ball, to his social life. The tennis and pickle ball communities, at both his winter home in Arizona and his summer home at Clear Lake, were a big part of his retired life. He loved tennis and valued it as a new skill and a great form of exercise and sociability with new friends. The shared enjoyment of all these sports with Denise made for many happy times with friends.
Cameron truly valued being part of his Oak River community and over the years served on the local boards of the rink and the United Church. Wherever he was living, the sense of belonging, supporting, and contributing to a community was important to him. He was always eager to start his day whether it was to begin the farming activity at hand, to go for a morning match at the tennis courts, or to join the early morning coffee group in Oak River. He enjoyed the social interaction of people and will be remembered by his many friends for his engaging conversations and his easy smile.
Cameron is remembered in love by his wife, Denise, and his children, Scott (Charlene Fossay) and Marnie (Eric) McLean, and his five grandchildren; his sisters, Lynn (Don) Smith of Dauphin and Leslie (Ralph) Sanders of Saskatoon; his in-laws, Ramona Carbotte of Hamilton, Dan DePauw and Alvin and Bonnie DePauw of Treherne, Ron and Else Marie DePauw of Swift Current; also by his nieces and nephews, and many Henry and McCrindle cousins.
He was predeceased by his parents, Stan and Jean Henry; parents-in-law, Marcel and Mary DePauw; sister-in-law Carol DePauw; and brother-in-law Jules Carbotte.
A Celebration of Life service was held on November 18, 2019 in the Oak River Community Rink with Rev. Lydia Glawson officiating. Our deepest appreciation to all who attended or sent messages of condolences.