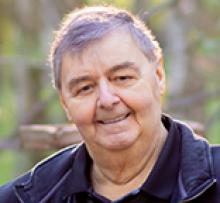 
Condolences may be sent to
www.wojciksfuneralchapel.com


Brian, aged 75, passed peacefully into the arms of his Savior, shortly after midnight on Saturday, December 7, 2019 at Riverview Palliative Care after his 11 year battle with Multiple Myeloma.
Left to remember is his loving wife of 52 years, Janice; children, Dana and Michael (Forster), Kristopher and Heather; grandchildren, Bailey, Garrett, Ethan and Mackenzie; brothers, Robert, David and Joanne; brother-in-law Ken Dalshaug, as well as many nieces, nephews and close family friends. He was predeceased by his father Edward; mother Florence and sister Vicki. Brian was born in Portage La Prairie, MB and often recalled spending memorable summers with his grandparents there. His family moved to Winnipeg and settled into the St. James area, unknowing at the time that only one street away would live the love of his life. Brian and Janice started dating while attending St. James Collegiate in Grade nine. They were married in Winnipeg on April 1, 1967. Brian graduated from Manitoba Technical Institute as a Red Seal Heavy Duty Mechanic and spent his career within the construction industry.
Brian loved sports. He coached hockey and baseball in St. James, played hockey for a Winnipeg Old Timers hockey league and refereed for community club hockey. When the Jets came back to Winnipeg, he shared hockey nights with his grandsons. Golf was something he really enjoyed and was fortunate to try several courses on his travels.
Family vacations were always a highlight and many happy memories were made on road trips, camping and later in sunny destinations and on cruises.
Brian loved belonging to The Bridge Church and sharing his faith with others. He treasured worshipping with his church family and so many special friendships were formed there.
We'd like to thank Dr. Rami Kotb, Jayne Kasian, Alexis, Dyani, Dr. Joel Gingerich, the staff of CancerCare MB treatment rooms, the staff at Concordia Hospital and the staff of Riverview Palliative Care for all of their support.
A celebration of Brian's life will be held on Wednesday, December 18, 2019 at 2:00 p.m. at The Bridge Church, 620 Oxbow Bend Road. In lieu of flowers, the family ask that donations are made in Brian's honour to CancerCare Manitoba.