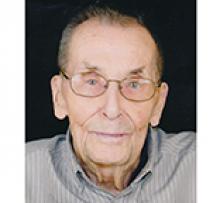 
Lucien Rouire, 98, passed away peacefully on Tuesday, December 10, 2019, at Actionmarguerite St. Vital. Lucien was born on January 13, 1921, in Bruxelles, MB. On June 28, 1941, he married Alexine Dequier.
He was predeceased by his daughter Jocelyne (2008), his daughter-in-law, Léona (Meilleur) Rouire (1994), his grandson Gilbert St. Godard (1994), his grandson-in-law Patrick Stokes (2017), his sisters and brothers-in-law, Angèle (Viateur Labossière and Amédée Picton), Agnès (Hugh McGrath and Arthur Buisson), Solange (Henri Viallet and Pierre Mineault), Lucie (Albert) Viallet and Thérèse (Arthur) Richard, his brothers and sisters-in-law, Adrien (Blanche Lalonde) and André (Thérèse Bourgeois), his brothers-in-law and sisters-in-law, Georges and Marie St. Godard, George-Aimé Tougas and Joseph Robidoux.
Lucien will be lovingly remembered by his wife, Alexine Dequier, his two sons, Ronald (Noella Gautron) and Robert (Audrey Hudson), two sons-in-law, Aurèle St-Godard and Robert Currie, eight grandchildren and six great-grandsons. Lucien is also survived by his sister, Annette Robidoux, and his sister-in-law, Thérèse Tougas, as well as many nieces and nephews.
The family would like to thank the staff at Actionmarguerite St. Vital for their care and compassion.
A memorial service will take place sometime in the spring of 2020. Final resting place is the Good Samaritan Niche at Glen Lawn Memorial Gardens.
Glen Lawn Funeral Home, 455 Lagmodière Boulevard is in charge of arrangements.