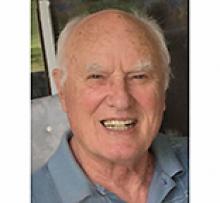 In loving memory of Raymond Clare Biglow who passed away on December 7, 2019, at Grace Hospital. With courage and dignity, Dad fought against a recent diagnosis of Endocarditis.
Dad will be forever remembered and sadly missed by Donnie, his beloved wife of 64 years; children, Bruce (Pat), Cory (Corinne), Gordon (Aaike) and Mark; grandchildren, Kaile (Pearce), Garet (Bonnie), Alan (Holly), Brent (Joanna); great-grandchildren, Owen and Audrey; and extended family and friends.
Dad was born on July 5, 1931 on his parents, Ernest and Ina's farm at Holland, MB. His early days on the farm likely sparked his dedication to hard work and subsequent success. In 1954, Dad graduated in his chosen profession from the School of Pharmacy at U of M. On June 18, 1955, Dad and his sweetheart, Donnie (nee Dubenski) joined their lives together in marriage. Over the next few years, life became very busy with four children and a corgi! Always keen to expose us to new experiences, Dad and Mom took us on many cross-country camping trips. Those trips enhanced our shared love of travel and the outdoors.
Dad began his pharmacy career at Howard Brown's Drugs and Bassey's Pharmacy on Academy Road. In 1966 he followed his dream and opened Biglow Pharmacy in Westwood. In 1981, Dad purchased a second drugstore, McCullough Pharmacy in St. Boniface. An opportunity to practice his French was a plus! Throughout his career, Dad's quick wit, sharp mind and business sense allowed him a good measure of success. He was well-respected by his customers, employees and colleagues. Outside of his drugstores, Dad served as chair of several committees of the Manitoba Pharmaceutical Association. He was President of the MPhA from 1978 to 1979. Dad also served on the Canadian Pharmaceutical Association Board. In 1985 Dad received the Pharmacist of the Year Award, a very special dedication! In 2011 he was awarded an Honorary Life Membership in the MPhA.
In 1980, Dad purchased land and built a lovely cottage on Channel Island on Lake of the Woods. In addition to Dad, family and friends spent many a weekend hauling building materials from the shore, building docks, etc. For the next 30 plus years Dad enjoyed projects, photography, reading and "resting his eyes" in a hammock at the water's edge, sailing, kayaking and canoeing. With Mom and, other family, including dogs "in rez" - Dad was at peace in his favourite spot. Dad's love of the lake and cottage became a part of us all. Several years ago, Dad constructed a golf course on the island. Not an easy feat given the rock in the area! Dad's annual weekend - "Tournament of Champions" became legend. Fellow golfers had great fun as they navigated the course and took turns cooking, dining and raising the odd glass at the "T.O.C."
Dad and Mom were fortunate to have travelled extensively. With their love of the arts, there were always concerts, plays and art galleries to attend and appreciate. In later years, favourite spots were the English and Leo Mol Gardens at "the park." Dad's love of photography resulted in many beautiful photographs which will accompany our memories. Dad was a man of action, always willing to lend a hand. He was a kind and gentle soul who truly cared about others. As we strive to follow his example, we are grateful for our time with a loving, devoted husband, and very special father. You will always be in our hearts.
Heartfelt thanks to all staff at the Grace Hospital for their care and compassion.
As per Dad's wishes, cremation has taken place and a service will not be held.
In lieu of flowers, a donation may be made to Assiniboine Park Conservancy - English Gardens or, Diversity Gardens


or the Winnipeg Humane Society winnipeghumanesociety.ca or to a charity of your choice.

Expressions of condolence may be sent to condolences@nbardal.mb.ca.