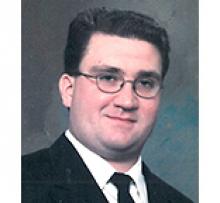 Peacefully on December 10, 2019 Scott Logan Yaskiw passed away at age 45, with family by his side.
Scott was born on May 14, 1974 in Winnipeg, first son of Lorne and Cheri Yaskiw. He was raised in Narol with his brother and two sisters. After graduating from University of Winnipeg, he pursued a career with McCain Foods in Portage la Prairie. Active member with John Travers Cornwell Sea Cadets for 17 years.
Along with his parents, he is survived by Bradley (Debbie), Shannon (Brock and Kevin); brother-in-law Adam; five nephews and one niece and many special friends. Predeceased by younger sister Jackie Hargrave and grandparents.
Celebration of Life will be held Tuesday, December 17 at 2:00 p.m. at Klassen Funeral Home, 1897 Henderson Hwy., Winnipeg, MB.
In lieu of flowers, if friends so desire, donations to Winnipeg Pet Rescue Shelter or The Winnipeg Humane Society would be appreciated.