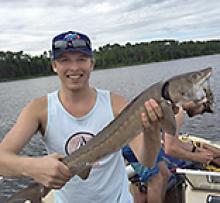 Caring, giving, gentle, sensitive and compassionate are just a few ways to describe Aidan James Kirby, aged 23, of Winnipeg, MB. Our loving son, brother, nephew and cherished friend with the heartwarming smile, was taken suddenly on December 7, 2019.
Born August 26, 1996 in Winnipeg, Aidan became involved in sports, music and outdoor life at an early age and was always happiest at the family cottage at Nutimik Lake in Whiteshell Provincial Park.
His great love of nature grew into a passion for boating, water sports, fishing and hunting, sledding and cross country skiing. He was a member of the provincial biathlon team, attending two Western Canadian Biathlon Championships and was a member of Red River Nordic race team.
Graduating from River East Collegiate in 2014, he considered becoming a wildlife officer or firefighter. To help prepare, he obtained a diploma in Outdoor Power Equipment Repair from Red River College and spent time at Winnipeg Sport and Leisure and Rond's Marine.
Aidan worked several summers at Nutimik Lodge starting at the age of 15, where learned many skills that he was able to apply to other employment. His warm welcoming smile and pleasant and helpful demeanour helped guests and customers to the store feel very welcome.
From 2016 to 2018, Aidan fought fires with the Manitoba Wildfire Program. Based in Lac du Bonnet and dropped by helicopter into remote locations, he enjoyed the exhilarating and physically demanding work, as well as the natural beauty of Manitoba's woodlands.
A music lover, he attended many concerts, played bass in high school concert band and taught himself to play guitar. Family gatherings and friends' campfires were never complete without a few songs from Aidan.
He had a soft spot for animals and would often call his parents, asking permission to bring home another rescued or disadvantaged dog.
In recent months, he travelled to Regina to see his beloved Calgary Flames in the NHL Heritage Classic and to Calgary where his hometown Blue Bombers captured their first Grey Cup in 29 years.
Megan Brook was the love of Aidan's life. They met during a school trip to France and Spain, growing closer over the next six years; high school sweethearts, excitedly building a future together.
Guided by a lifelong desire to help others, Aidan's warm personality, upbeat attitude and open-minded approach earned him countless friends and endeared him to colleagues at work. At the time of his passing, he was employed as apprentice plumber with Thor Plumbing and Heating in Winnipeg.
Aidan is predeceased by his grandparents, Art and Florence Kirby of Winnipeg and Frank and Ruby McKendry, also of Winnipeg. Left to mourn are his parents, Patrick Kirby and Tracy McKendry of Winnipeg; sister Bryn; his beloved Megan; family in Winnipeg, Brandon and Edmonton and friends throughout Manitoba.
A Celebration of Life will be held on Friday, December 27, 2019 at 1:00 p.m. at Covenant Christian Reformed Church, 653 Knowles Avenue, Winnipeg, Manitoba.
In lieu of flowers, donations can be made to Manitoba Mutts or the Manitoba Wildlife Federation.