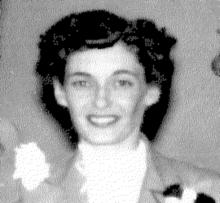 
It is with great sadness we announce the passing of Shirley, loving wife, mother, grandmother and great-grandmother, at the St. Boniface Hospital on November 30, 2019.
She leaves to mourn her passing, her husband of 66 years, Herbert; daughters, Shirley and Lynn; son Stephen (Amelia); grandchildren, Loren (Steve), Shay, Rochelle, Kwesi, Ben, Jordy and JD; great-grandchildren, Natalie, Evelyn, Mekayla, Jeremy, Brandon, James and Shaelyn.
Shirley was predeceased by her parents, Joshua Thompson and Sarah Fraser, and her brother, Jim Thompson.
Born and raised in Manitoba, Shirley grew up on the family dairy farm in Russell, Manitoba, and later the family farmed just east of Winnipeg on Murdoch Road. As a young woman, Shirley lived and worked in Winnipeg where she met Herb, marrying in 1953. Life in Winnipeg during those early years included many parties with the rug rolled up, music playing and some serious dancing going on. The family moved to Rivers, Manitoba in 1959 and then to Ottawa, Ontario in 1966 when Herb was posted with the military. Naturally outgoing and never shy, Shirley easily made new friends wherever she lived. She loved family events and never missed a birthday or family gathering, even when mobility became an issue. We will all be missing her presence at future family gatherings.
As per Shirley's wishes there will be a private family gathering held in celebration of her life at a later date.
Thank you to all the staff at St. Boniface Hospital for their care and compassion.
In lieu of flowers, donations may be made to the St. Boniface Hospital Foundation.