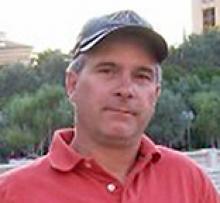 After a 16 month battle with brain cancer, Shawn Michael George Prybylski passed away on December 7, 2019, at the Vermilion Health Centre in Vermilion, AB. He was 50 years old. Shawn was born in Thompson, MB on October 15, 1969.
He leaves to mourn his wife, Pauline Prybylski of Kitscoty, AB; three wonderful sons, Austin, Travis and Carter Prybylski of Kitscoty, AB; sister Michelle Cockerill (Gerry) of Okatoks, AB, brother Darren Prybylski of Winnipeg, MB, and nephews, Kyle, Zach, Kelsey, Max and Riley Cockerill.
Shawn was predeceased by his parents, Alvin and Sandy Prybylski and Uncle Elwood Prybylski.
Shawn grew up in Lynn Lake, MB. He loved his hometown and was always sharing his memories of his life growing up there and working with his dad and uncle at their business, Alcam Trucking. He will always be remembered for his love of muscle cars and engines, especially diesel.
Going to car shows was a favourite pastime, as well as attending NHRA drag races. Shawn could do and fix anything and did it greatly. From plumbing to electrical and everything in between. He built our 28'x32' garage on his own with help from Austin and Travis. He was very proud of that and his dream was to build a house.
His greatest achievement was his sons. There was no prouder father. In September 2019, Austin acquired his Class 1 and Shawn was so happy to see that happen. Around the same time, Travis got a job where he will apprentice as an Auto Mechanic, another proud papa moment. Carter is in Grade 12 and continues to maintain a very high GPA and Shawn enjoyed bragging him up. Shawn wanted desperately to be here for graduation and to see him off to university in the fall, but we know he will be with him in spirit.
Shawn met Pauline in 1990, got married in 1996 and started their family. Right before Carter was born, they moved to Stony Mountain, MB where they bought and ran a service station with a mechanical shop. They met many wonderful people in the community with whom they remain close to today. In 2007, they sold the store and moved to Fort McMurray. Shawn was a Heavy Equipment Technician and enjoyed working on the massive haul trucks. In 2008, they relocated to Kitscoty, AB but Shawn continued to work in Fort McMurray and became a commuter. In October 2018, he got his 10 years in at Syncrude Canada Ltd. He worked in several sectors there. From the auto shop, then a Service Writer and finally, an Expediter. Shortly before Shawn became ill, he was accepted to apprentice as a boom truck operator. He enjoyed trying many things.
Special thanks to his sister Michelle for driving 1000 kms. round trip every weekend for five weeks to be by his side; and also for the comfort and support for Pauline and the boys. Pauline and her sons would also like to thank the nursing staff at the Vermilion Health Centre for the exceptional palliative care Shawn received.
A funeral service will be held at 2:00 p.m., Wednesday, December 18 at the Church of the Ascension (Stonewall Anglican Church) First Avenue N. at Second Street W., with interment at Stonewall Cemetery.
Pallbearers: Austin, Travis, Carter Prybylski, Darren Prybylski, Gerry Cockerill and Nick Kozy.
Donations in memory of Shawn can be made to Vermilion Palliative Care, 5720 50 Avenue, Vermilion, Alberta T9X 1K7.