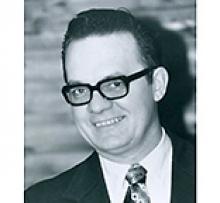 
"Lead, follow, or get out of the way." One of Ed's many one-liners.
Born prematurely at home on the farm in the Swan River Valley, Ed was a fighter from the very beginning, which continued to his last few days. He grew into the kind of person who knew how to do just about anything. After graduating from the University of
Manitoba (Aggie class of '62), he spent his working life in finance, first with MACC and then with the TD Bank. Ed loved organizing events and bringing people together.
Generous with his time, he enjoyed his
involvement with Kinsmen, 4-H, Boy Scouts, politics, coaching and convening baseball, and more recently as treasurer of his church.
Family was extremely important to Ed. He would instigate and host large gatherings, making sure people knew who their cousins and great-aunts were. Ed's hobbies included woodworking, curling, fishing and gardening (which gained him the title of Onion King by his family).
Unconventional, intimidating and good at letting things go, Ed was ultimately a softy who loved his family and adored his
grandchildren and great-grandchildren. He will be greatly missed by his wife Marilyn and their children, Jacqueline (Robert),
Barbara (Philip), Eldon (Rena),
grandchildren, Arlo (Wilson), Zorya, Annachie, Ada and Sonny, and great-grandchildren, Eduardo and Carolina, his
sisters, Roberta, Ollie (Bryan) and Marilyn (Lloyd) and his sister-in-law Jean, as well as many nieces and nephews and extended
family.
Ed was predeceased by his parents and his younger brother Ken.
Ed's family would like to thank the staff with Palliative Care and the Riverview Health Centre for their excellent care, and a special thank you to Jeremy.
A celebration of Ed's life will be held at Cropo Funeral Chapel, 1442 Main Street on Monday, December 30, 2019 at 11:00 a.m.
In lieu of flowers, a donation may be made to a charity of your choice.