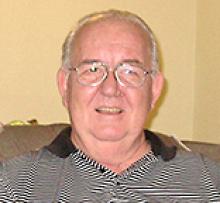 
It is with profound sadness that we announce the passing of our dad, Jim Beaton, 78. He passed away peacefully, Thursday, December 12, 2019, surrounded by family, after a brief illness resulting from kidney failure.
He will be mourned and sadly missed by his daughters, Dana (James) and Nicki (Shannon) and his four beloved grandchildren, Noah (20), Ireland (20), Avery (18) and Easton (17). They will miss their Papa so much. He is also survived by one sister, Ritchie. He was predeceased by his parents, a nephew and a sister, and by his wife of 37 years, Helene, in 2004.
Jim was born in 1941, in Winnipeg, the oldest of three children. He was an avid golfer and curler from his teenage years, and later a bowler, and was a long-term member of Pine Ridge Golf Club. He married his wife Helene in 1967, and they had their girls in 1971 and 1973. He was a very hard worker, working as a controller for Delta Electric and then Wescan Electrical and Mechanical services in his career. His love of golf took him on several trips, golfing in Phoenix, at Pebble Beach in Florida, and memorably in Ireland in 1999. He lived out a dream of seeing The Masters in 2007.
Our dad was a man of simple pleasures and loved nothing more than his wife's cooking and a jelly donut. He often said that he had loved his life and had no regrets, and few of us can say that. We will miss his stories and his infectious laughter, and the nicknames he gave each one of us – we have all remarked that you knew he liked you if he gave you a nickname, and once he did, he would very rarely use your given name. It's a comfort to know he is reunited with his dear mother, and his wife.
Cremation has taken place and no formal service will be held. Instead his family will be interring his ashes with his wife's in a private family celebration of his life.
In lieu of flowers, donations may be made to the Kidney Foundation of Canada or Diabetes Canada.