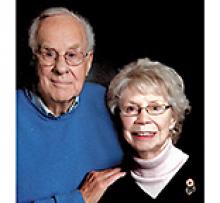 
On December 11, 2019, and for the second time in the last four months, we the Connor family have suffered the loss of a parent. Our dear mother left this world to join her husband and our dad, in the life hereafter.
Mom was born September 1, 1930, the first of two children to Harry and Mary Duncan. She was predeceased by them and her brother Jack.
Mom fulfilled her dream of being a good wife and great mother with her children, Susan, Cameron (Sherilyn), Gordon and Marshall (Janeth). There was also nine grandchildren and four great-grandchildren.
After being born at the old Grace Hospital, she spent her childhood in Portage la Prairie, where she made many friends. When she met and married Dad, they moved and settled in cities from Ottawa to The Pas. It was dad's job that had them moving about until being located in Winnipeg. She was thrilled to have her house and white picket fence, close to her parents and brother Jack. 69 years of marriage later we'd say that she made her dreams come true.
We would like to thank the incredible staff at the Victoria Hospital 2nd and 5th floors with a special shout out to nurse Deborah who worked so hard to make mom's last day as comfortable as possible.
As per her wishes, a cremation will happen and a small private service for family.