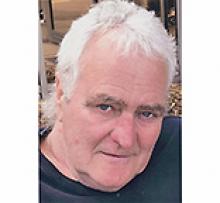 Randy's hard-fought battle with ALS came to an end with his family by his side at Selkirk General Hospital.
Randy is survived by his wife of 39 years, Michele, and their two children, Jill (Lee) Finch and Scott (Melyssa) Kehler; his grandchildren, Ashley, Spencer, Ella, Christian, Jackson and Ethan. He is also survived by his mother Annie Kehler, along with his siblings, nieces, nephew, great-nieces, great-nephews, along with his extended family and friends.
Randy was predeceased by his father George and nephew Wade.
Randy was a hardworking man who was devoted to his family. His grandchildren were his pride and joy.
The family would like to thank all the wonderful home care staff and the palliative care team that made it possible to honour Randy's wishes.
The funeral will be held at Oakbank Baptist Church, 26033 Springfield Road in Oakbank on Friday, December 20 at 11:00 a.m.
In lieu of flowers, if friends so desire, donations to the ALS Society of Manitoba or the Andrew Dunn Organization are greatly appreciated.


Condolences may be left at
seasonsfuneals.ca