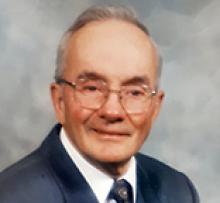 It is with deep sadness we announce the peaceful passing of Rene Monchalin on December 15, 2019, at Actionmarguerite Valade, at the age of 86 years. Rene was released into God's loving arms after battling a number of health issues. Rene was born in Notre Dame de Lourdes on June 21, 1933.
He was predeceased by his son Leo in 1999 and his sister Eliette Muller in 2016.
He will be lovingly remembered by his wife of 63 years, Muriel (nee Tarko); his sons, Denis, Marc (April), Roger (Jackie) and Louis, and his daughter Diane (Jeff). He also leaves behind his 12 grandchildren, 14 great-grandchildren and many nieces and nephews.
Dad worked as a telegraph operator for the railway, but he always had farming in his heart. He was a grain elevator manager for most of his working life. He worked in many parts of Manitoba including Notre Dame de Lourdes, Bergen and Rosser where he eventually retired from his work and hobby farm.
Dad loved to fish and hunt. Many of his favourite memories were buck hunting in Notre Dame or holding a fishing rod somewhere in Manitoba!
Dad became a resident in Actionmarguerite in June 2018. He participated in 'craft day' and much to our surprise, discovered a hidden talent for painting! A very heartfelt and special thanks to all the staff at Actionmarguerite who took such great care of Dad.
As per his wishes, cremation has taken place. A service will be held at St. Charles Parish (320 St. Charles Street) on Tuesday, December 31 at 10:00 a.m.