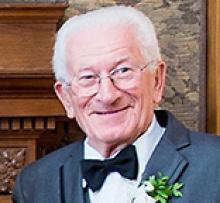 
It is with great sadness that we announce the sudden passing of Myron Kostelnyk on December 14, 2019.
Myron is survived by Genevieve, his partner in life and wife of 52 wonderful years; their loving children, Patricia, David and Will (Kim); grandson Dylan; sister Anne (Ted); sisters-in-law, Gloria, Marge, Leona (Philip), Marion (Blaine) and Faye; as well as many nieces, nephews, cousins and dear friends. Myron was predeceased by his parents, Ilya and Eva, and brothers, Willie and Sam. It is comforting to know that he will now be reunited with them.
Myron was born on February 24, 1941 and raised on a farm in St. Martin, Manitoba. In 1953 he moved to Winnipeg to join family and complete the remainder of his grade schooling. After graduating Grade 12 from Sisler High School in 1958, he enrolled at the University of Manitoba, School of Engineering. He graduated with a Bachelor of Science (Civil Engineering) degree in 1962.
Myron's professional career was a long and distinguished one. He worked at Transport Canada, the City of West Kildonan, the City of Winnipeg, and I.D. Engineering. He was also involved in starting up both a construction company and a consulting firm. Prior to retiring, Myron was performing consulting work on his own.
Myron married Genevieve, the love of his life, on October 26, 1967 and shortly thereafter began their own family. Myron truly loved and cherished all his many family and friends. There is nothing he wouldn't do for them. His great sense of humour and welcoming/generous nature would be experienced each and every time you met him. A very special source of pride and joy for Myron these past few years has been his grandson Dylan. Words cannot describe the happiness that young boy would bring to grandpa whenever he saw, talked or thought about him.
Myron performed volunteer work over the years in support of the many activities of all his children. He enjoyed bowling with his wife; following and watching sports with his children; going to the casino with friends; reading mystery novels; doing crossword puzzles; as well as building and fixing whatever he could as he could just never sit still. We will sorely miss you my husband; my father; my grandfather; my brother; my uncle; my friend.
A service will be held on Saturday, December 28, 2019 at 10:00 a.m. at Glen Eden Funeral Home, 4477 Main St., West St. Paul.
In lieu of flowers, donations can be made to Special Olympics Manitoba.