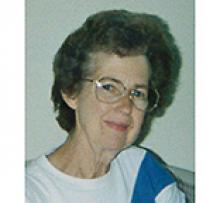 
Audrey Hilda Nielsen, of Steep Rock, MB., passed away on Friday, December 13, 2019, at the Golden Door Retirement Home in Winnipeg, MB.
She is survived by her son Karl (Kim); daughter Dawn; grandchildren, Tyler, Brittany (Gatlin), Kaitlin (Keenan) and Trevor; and great-grandchildren, Dante, Sawyer, Isabel and Alexander.
She was predeceased by her parents; sister Dorothy Hjartarson; brother Roy (Edna) Shiells; and former husband.
Audrey was born to Herbert and Brita Shiells on October 3, 1930. She was a member of the United Church and, for many years, was their organist. She was also a member of the Curling Club and Ladies Auxiliary to the Canadian Legion. In 1948 Audrey married Gunnar Nielsen and they had two children together. She later moved to Winnipeg and was blessed with four grandchildren and four great-grandchildren who were her pride and joy!
A memorial luncheon will be held on Sunday, January 12, 2020, at 1:00 p.m. at Birchwood Funeral Chapel, 162 Hwy. 52 W., Steinbach, MB., with ash interment to be held in spring.