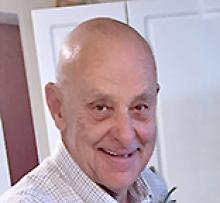 On December 17, 2019, after a lengthy battle with cancer, Ron passed away peacefully at St. Boniface Hospital, three days before his 76th birthday.
Ron was predeceased by his loving wife Delores, who passed away 11 weeks before him. He is also predeceased by his parents, Nick and Rose Piush, and brothers-in-law, Roman Manastersky and Adam Tabacki, plus many other relatives.
Ron is survived by his son Jeff; daughter-in-law Candice; granddaughters, Chelsea and Ava; sisters, Nadine (Nick) Yacheson and Evelyn Piush and many nieces, nephews and friends.
Ron was born in Winnipeg and raised on Pritchard Avenue. It was there that he met his future wife, Delores (Dolly), who lived across the street. Ron and Dolly started dating when Ron was 14 years old. After a 13-year courtship, they married in 1967. In 1969 they purchased what would be their 'forever home' where they raised their family and welcomed their grandchildren.
Ron was a hardworking and dedicated employee of CP Rail for 39 years, where he worked as a Safety Assurance Supervisor. Throughout this time he developed and maintained treasured friendships. Ron's greatest joys included: enjoying the summers at Catharine Lake, fishing, and the simple pleasures of spending time with family and friends. In later years, nothing brought him more joy than spending time with his granddaughters. He enjoyed watching them play soccer and was actively involved in all aspects of their lives.
Ron was a strong man in both stature and character. When his wife Dolly passed away, Ron was heartbroken causing his health to deteriorate. Ron and Dolly have never spent a Christmas apart in 52 years and this year will be no different.
Ron lived life his way, right to the end and will never be forgotten.
A Celebration of Life will be held later this week. Contact family for further details.