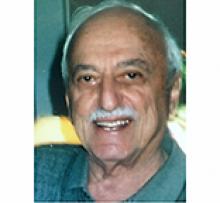 Passed away peacefully, at the age of 95, at the Concordia Hospital.
Ralph was preceded in death by his parents, Isadore and Dora Sotolov, Dr. Louis Sotolov, his first wife Dorothy and second wife Barbara.
He is survived by his loving son Dr. Howard Love, loving wife Gita Glass, sister Betty Riskin, stepsons, Butch, Ken and Steven Atnikov, stepdaughter Marlene Ackman, and many nieces and nephews.
Ralph was born in Winnipeg and served in the R.C.A.F. during the Second World War. After the war he remained in the R.C.A.F. as an education officer until the late 1950s when he returned to university to obtain a diploma in Education and B.Ed degrees. He taught science at Viscount Alexander Junior High and then high school biology at Vincent Massey Collegiate (VMC) in Ft. Garry in the early 1960s. He became vice principal of VMC in 1965 and then principal in 1967. He served as principal for 20 years until his retirement in 1987. Ralph was a dedicated, compassionate and understanding administrator who commanded the utmost respect and admiration of all teachers and students during his years as principal. He was a great orator and always received the complete attention of all staff and students during the many assemblies at VMC. During his years as principal many positive changes occurred in the areas of phys. ed, drama club, and administration. VMC was mentioned in the Chatelaine magazine as one of the top 10 high schools in Canada during Ralph's years as principal. He obtained his M.Ed. degree in the late 1960s. Ralph initiated one of the first Grade 12 optional attendance programs for students in Canada at VMC in 1969. He also ran a private summer school at VMC for many years while he was principal and after he retired in 1987. Ralph always attempted to recruit the best teachers possible in order that the students obtain a sound education to prepare them for their future endeavours after high school. He always made the welfare of teachers and students his main priority.
After retirement in 1987 Ralph enjoyed his three month winter vacations to Palm Springs, CA for 25 years. His final trip was to Medellin, Colombia at age 94 with Gita and son Howard.
Funeral services were held at Chesed Shel Emes and interment at Shaarey Zedek Cemetery.
Donations may be made to the Alzheimer Society of Manitoba.