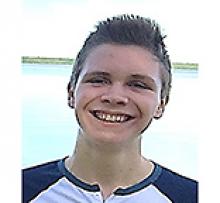 With shock and profound sorrow, we announce the sudden passing of Hunter Skaritko at the age of 19.
Hunter was raised in St. Andrews, Manitoba; the Interlake was home. He attended school in the Lord Selkirk School Division and graduated in 2018 from "The Comp". Early on he enjoyed team sports like soccer, flag football and hockey; playing for St. Andrews. A juvenile arthritis diagnosis curtailed further participation in physically demanding sports so he turned his energy to gasoline athletics; cars and snowmobiles became new interests and Hunter engaged in both with reckless abandon.
Hunter liked working with his hands and could be found tuning his rides to make them faster, louder, and better handling. No mechanical task was too challenging. He was an accomplished cook and enjoyed his organic creations made in the kitchen. He enjoyed part-time jobs at DQ in Selkirk and at Seagulls in Gull Harbour. He loved the outdoors, rugged shorelines of islands, and the many lakes and rivers he visited in summer and winter. He was particularly fond of Hecla Island and Hawaii where he felt his soul was.
Friends and girlfriends helped form some of his passions; one of which was veganism. He embraced the concept and culture of not killing animals for a food source, and enjoyed the benefits a plant-based diet had on his body; he was lean, fit and strong.
Prior to attending the University of Manitoba this year, he chose to volunteer, or work to stay, on organic farms to learn the skills to grow foods and take them to market. He lived for several months in tropical rainforests near Honokaa on the Big Island, and then near Kula on Maui. He experienced much during his time there; surviving near hypothermia on the world's tallest mountain Mauna Kea; a 5.3 earthquake while he was in Hilo; night swims in the Pacific Ocean with the locals and mantra rays; and developing friendships with adventure seekers, much like himself, from around the world. He also saw firsthand the dark underbelly of Hawaii, of which few people experience. Over a recent family dinner, he proudly announced that Australia would be next. He felt he could change the world; he has changed ours forever.
Hunter saw the positive side of events and people. He wore a big smile and was humble, kind and forgiving. He had a positive impact on those around him and was driven, focused and strong willed. We are so saddened he will not be able to live out his dreams and aspirations.
Left to mourn and cherish his memory are parents, Judy and Wayne Skaritko; sister Dana (Chad); grandparents, Helen and Michael Onyschuk; grandparents, Betty Ann and Ron Skaritko; auntie Sheryl and uncle Bill Woloskoski, aunties, Wendy, Debbie and Barbie Onyschuk, cousins, Shaylie, Cheyenne, Chad, Noelle and numerous second cousins he had enjoyed time with; and the friends he made through school, work and recreation. He will be missed deeply.
A private family viewing was held December 25 along with a close family memorial.
In lieu of flowers donations can be made to The Arthritis Society.
Condolences may be sent to the Tribute Wall at Gilbarts:


We thank family and friends for their prayers and support.