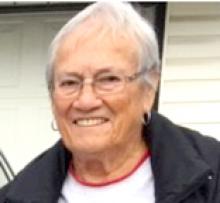 It's with profound sadness that we announce, peacefully after a battle with cancer, Joan passed away on Friday, December 27, 2019.
She is survived by her dear friend Elaine James; her sister-in-law Ruby Ingram; nephews, Rod Ingram and Mark Hungerford (Martha) and Carley; niece Shelley Hopper (Dwayne) and Lauren, and Lindsey and their families. Also left are many cousins and extended family that were so very special to Joan, including her longtime friend and teammate Laurie Bradawaski.
She was predeceased by her parents, Ben and Alberta Ingram; her brother Richard (Dick) Ingram; her twin sisters, Doreen Thomas and Diane Hungerford; her brother- in-law Orv Thomas; and nephew Bob Thomas.
Joan was born February 26, 1936 in Oakville, MB. She lived in Oakville until she finished school and made so many great friends who she kept in touch with until this day. The Ingram's had a café in Oakville, where undoubtedly a lot of her friendships were formed. She moved to Winnipeg to start her working career with Eaton's Catalogue Store until it closed. She then worked with the City of Winnipeg (Parks and Recreation Department) until she retired at age 60.
She was approached to play softball for C.U.A.C. when she moved to Winnipeg and did so for many years. With her help and many others, the team was able to win the 1st Women's Western Canadian Softball Championship for Manitoba in 1957 and continued to dominate the Senior Ladies softball League by winning the Canadian Championship in 1965.
Joan could be found coaching the St. Boniface Royalettes Senior Women's Softball Team along with her good friend from Oakville, Joyce Tully. She was always willing to help any athlete whether they asked her or she offered without hesitation. Joan's sportsmanship was unparalleled, win or lose, and could be found after the game socializing with her competition. Joan's dedication to softball allowed her and her C.U.A.C. team to be inducted into the Manitoba Softball Hall of Fame as a team and also an individual. The C.U.A.C. team was also inducted into the Manitoba Sports Hall of Fame, where she was honoured as well as a individual top athlete.
Curling was another passion of Joan's. She won her only Canadian Women's Dominion Curling Championship, with Betty Duguid as skip in 1967. She was a four-time Manitoba Women's Curling Champion; a four-time Manitoba Senior Women's Curling Champion and the first Manitoba Masters Women's Provincial Champion. She led many of her women's and senior women's teams to numerous provincial and national championships over the course of her athletic career. She was inducted into the Manitoba Curling hall of fame as an individual in 1989, as well in 1992 with the Betty Duguid team.
You could also find Joan on the golf courses, especially at CFB Winnipeg or Charleswood Legion tournaments held at Player's Golf Course.
Joan was fiercely competitive, proud, loud and loving sister, aunt, and friend with a big heart.
She was a class act and was very well respected by so many people. She truly loved to socialize, entertain and supported the Blue Bombers and the Winnipeg Jets. Her doors were always open to friends and family. She will be truly missed by a host of relatives and friends.
The family would like to send special thanks to all the home care workers, special friends (Colette, Karen, Debbie, Cheryl, Grace, May and Eddie) and relatives who supported Joan and Elaine with all their needs; visited her at home, and at Lion's Manor during her most difficult times.
We would also like to thank the nurses and doctors that took such excellent care of her at the Grace Hospital, St. Boniface Hospital, Health Sciences Centre, CancerCare Manitoba, Parkview Place and Lions Manor. Special mention to Wheels of Hope who made sure Joan made it to all of her appointments safely and on time.
Cremation has taken place at her request. A graveside service will take place at a later date in Oakville Cemetery.
A reception will be held at Deer Lodge Community Club, 323 Bruce Avenue, Winnipeg, from 1:00 p.m. to 4:00 p.m. on Saturday, January 11, 2020. Formal activities to start at 2:00 p.m. Refreshments and cash bar available.
Thank you to Kathy Penner and the funeral home staff for helping us at this very difficult time.
In lieu of flowers, donations may be made to a charity of choice.