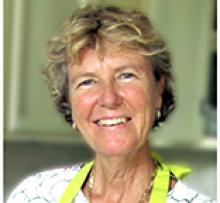 Surrounded by friends and family, our beloved Rosemary passed away peacefully on December 27, 2019.
Rosemary was born in Winnipeg and lived in the River Heights area. She spent her childhood on Carpathia Road and eventually moved to Oxford Street. Rosemary attended Carpathia School, J.B. Mitchell, and Kelvin High School. She graduated from the University of Manitoba with a degree in Human Ecology.
The acquaintances, relationships and friendships Rosemary developed in her high school and university days have endured. She formed especially close relationships with the Johnstons (Diane and Dave, Matt and Will), and the Fergusons (Colin, Alison, Andrea and Ainslie). Rosemary's bond with Diane and Alison has been the foundation of a large extended family, one that has shared all its most important moments together, whether through travelling, sharing celebrations, or supporting each other in any number of ways.
Growing up, Rosemary spent summers at her family cottage at Victoria Beach. She was lucky to continue spending many more summers there, at 301 7th, with Bob, Cam, and Corey. Rosemary played a variety of sports, and over the years became an avid and skilled tennis player. She built many lifelong relationships with her tennis group at Victoria Beach, along with her friends at the Winnipeg Winter Club. She was particularly fond of the many Tuesday mornings spent playing tennis with Bev, Megan and Claire.
Surprising herself, Rosemary also became an accomplished creative artist. She focused initially on stained glass, and then moved on to produce an extensive portfolio of works in fused glass. Rosemary's glasswork is truly beautiful. As a result - and despite her modest approach - it has become highly desired and admired. Her work has been featured in the Boreal Shores Art Tour, Lacosse Gallery on Lilac, St. Peter's Church Emerging Artists Show and Sale, and many home showings.
After spending 20-plus years working with preschool children at the Society for Manitobans with Disabilities, Rosemary became a key part of the founding and development of Robert R. Scurfield & Associates, with her husband Bob. The success of the company led to a whole new direction for Rosemary and Bob: travel. They travelled initially to the Caribbean and Mexico. This led to an ongoing, long term connection to Ixtapa, where they also met and looked forward to spending time each year with Claudia and Chris Shae and their family. With her characteristic enthusiasm for adventure, Rosemary embraced this whole new dimension to her life with Bob - they added new destinations every year, including Central and South America, Africa, Europe, Asia and New Zealand. A special trip was to Canada's Maritime provinces and eastern Québec.
Knowing Rosemary was to know her Westies, too. Those noisy, loyal, loving little dogs - Bonnie, Murphy, Piper and Logan - were a key part of who she was.
In these past months, whether through calls, visits or cards from friends and acquaintances, the words used to describe Rosemary include "sweet, endearing, calm, graceful, beautiful, gentle, strong and creative". Quietly, but fiercely loyal to her boys, and proud of them, she has instilled in them strong values and principles as they developed into the skilled, capable young men they are today. Rosemary is survived by her husband, Robert Scurfield, sons, Cameron Boult and his partner Fiona Wollensack, Corey Boult and daughter-in-law Stephanie Kolly-Boult, stepson and stepdaughter Melissa and Rob Scurfield, brother Brian Hodgson, sister-in-law Nancy Hodgson, and their children, Tom, Megan and Steven, and the Johnston and Ferguson families.
She was predeceased by her father and mother, Thomas and Kathleen Hodgson, and brother Allen.
The family would like to express their appreciation and gratitude to the doctors, nurses and staff at CancerCare Manitoba, and to the wonderful Palliative Care team at Riverview Health Centre. Rosemary formed special bonds with the nurses and aides there. Their kindness and caring made Rosemary's last days safe and comfortable.
Cremation has already taken place. Family and friends will be invited to a celebration of Rosemary's life at a date to be announced.