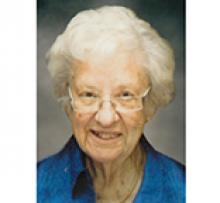 Evelyn "Jean" Stephenson, homemaker extraordinaire, mother, grandmother, musician and volunteer, died peacefully at Fairview Home in Brandon on Friday, December 27, 2019. Jean was born in Minnedosa, Manitoba in the spring of 1923, the first child of Alice Louise Turner and William Paton Watson. From all accounts, though a child of the depression, resourceful parents, lifelong friendships forged on the uphill both ways (really) walks to school everyday, and fine teachers in those schools provided an idyllic childhood that created a lifelong love of Minnedosa and its inhabitants.
Jean learned by example from her very independent Mother, (her Dad was a railroader and away a lot), how to be a fine cook, seamstress, knitter, community worker, musician, bridge player and life-long learner. When her younger brother Bill came along, she was a bit dismayed by his pushing the boundaries on accepted family decorum, but she loved him dearly.
After a year at United College, Jean returned to Minnedosa to work at the Royal Bank, and to begin her long relationship with the United Church and its choirs there. She began the United Church Junior Choir when her Sunday School class of senior girls talked all the way through the hymns as she played the piano. She told them, "Enough of that. Come Thursday after school and we'll learn the hymns together" and the rest, as they say, is history. Jean led the Junior Choir on a volunteer basis for 30 years during which the choir sang an introit and anthem weekly at the Sunday School worship service, entertained at community events during Advent, put on a yearly spring concert and regularly won shields and trophies at Brandon and Winnipeg Music Festivals, sometimes besting the Winnipeg Girls' Choir and the Winnipeg Mennonite Choirs. Jean also led the Senior Choir at the church when needed.
It wasn't all work and volunteering. Hugh Milton Stephenson returned from service and in 1949 Hugh and Jean began their married life together. Hugh ran the business and Jean ran the home, each supporting the other in community endeavours. Jean provided a nurturing home where music and swimming lessons for their three daughters were a given, but any other interests were supported as well. Dresses were beautifully hand crafted, delicious meals magically appeared for extended family and friends, and Christmas, New Years and the Grey Cup were celebrated vigorously! When her daughters' musical talents outgrew the local teachers, Jean got her driver's license in order to get the girls and their friends to Brandon for lessons.
Brandon became home in 1972, and Jean's gift of music education offered the opportunity to help out with Vincent Massey music productions and also sing in the choir at First Presbyterian Church, thus creating a network of new friends. Beta Sigma Phi membership (carried over from Minnedosa) bridge and golf provided other friendships, all of which were cherished by Jean. When she wasn't attending concerts, Jean was volunteering with the Brandon Music Festival, the E-Gré Competition, and at Brandon General Hospital, knitting afghans, Cowichan and Aaron sweaters and mitts or doing crosswords. When the move to Village Green occurred, Jean became an MC at condo gatherings, organized community hymn sings and sat on the board.
Jean grew up enjoying camping at Clear Lake with her friend Jean Crossley's family. Through the years, Jean and Hugh had places on First Street in Clear Lake, but when family expanded, they found a place on Harebell so that there was room for the whole family to come for golf, barbeques and just good family times. A journal keeper, Jean recorded every visit, bridge game and unusual weather event at the lake. Evidence was found of her research for programmes for Beta Sigma Phi and personal bible study that revealed an intellect that she kept mostly hidden, though she was a fierce debater of politics, religion and ideas for the remedying of societal ills.
Jean lost her beloved daughter Pat too early, then the love of her life, Hugh, in 2009. Shortly after that, she had a fall, and chose, after some time in the Assiniboine Centre, to move to Fairview Home. In declining health since, she was always grateful for visits and for the care she received from the staff there. She (and her family) was especially grateful to Arlene Robertson, a former accompanist of the Junior Choir and lifelong friend who visited Jean faithfully.
Left to cherish Jean's memory are daughter Ruth and Dan Wiwchar, and grandchildren, Stephen (Lisa) and Michael (Mara); daughter Dianne and Dave Sjoberg, and grandchildren, Kate, Erik (Shelley) and Joshua (Summer); and son-in-law Brian Cottom and grandchildren, Kyla (Ben) and Lauren. Jean's great-grandchildren are Reese and Jackson Wiwchar, Milo Wiwchar, Stefan Sjoberg, Hudson, Willa and Holden Sjoberg and Neveah Isleifson, brother Bill's children, and cousins on the Turner side.
The ceremony to celebrate Jean's life will be held on Saturday, January 11, 2020 at 12:00 p.m. at First Presbyterian Church, 339-12th Street, Brandon. Please join the family for lunch afterward in Duncan Hall, lower level of the church.
Flowers are gratefully declined. Friends might donate in Jean's name to First Presbyterian Church Foundation, 339-12th Street, Brandon, MB R7A 4M3, Minnedosa United Church, Box 692, Minnedosa, MB R0J 0C0, or the Canadian Cancer Society, 193 Sherbrook Street, Winnipeg, MB R3C 2B7.