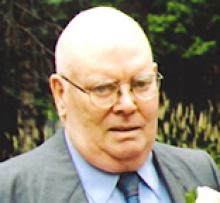 It is with great sorrow that we announce the passing of Lawrence (Larry) Robert Wright on December 28, 2019, at the age 84, after an illness with Alzheimer's.
Larry was predeceased by his wife Lillian (November 7, 2017). They shared 54 years together.
Lawrence is survived by his four children: Chris (Millie), Sandra (Tim), Sharon (Sean) and Alex (Jolene); eight grandchildren: Nathan, Jeremy, Jenna, Matthew, Joshua, Jordan, Ella and Aliyah; brother William (Bill) Wright, and sister Elaine Hooper, as well as numerous nieces and nephews.
He was predeceased by sister Clarice.
He was born October 28, 1935 in Liverpool England. He eventually immigrated to Canada where he met his wife Lillian and settled down and had their family. He enjoyed 35 years of working for various airlines in flight services before he retired.
When he retired he became an avid woodworker, he enjoyed many hours in his wood shop. He also became quite the accomplished cook. Larry also enjoyed riding on his motorcycle.
Dad and Mom used to love camping and fishing. They spent many summers at Asessippi with their faithful companion Pepper.
After Lil passed, he found comfort in his new dog Rio, who was a faithful companion. They were always together. Rio was Dad's lap dog.
Larry always enjoyed sharing his stories from his times in England and times served in the Army. He also had a great sense of humour.
Dad your stories will be greatly missed by your children and grandchildren. We will carry them with us forever.
The family would like to thank all the staff at Oakview Personal Care Home for their care and kindness throughout Dad's stay with them.
There will be a Celebration of Life in honour of Lawrence and Lillian Wright from 11:00 a.m. to 2:00 p.m. on Saturday, January 25, 2020, at the Army and Navy located at 3584 Portage Ave. A scattering ceremony will be announced at a later date.

We love you Dad. Forever in our hearts.