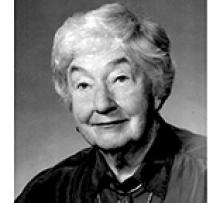 Surrounded by loving family, Leonore Marion Saunders (née Gladwell) died peacefully on December 16, 2019, a month short of her 95th birthday.
Born in Whaley Bridge, Cheshire, England, to Leonard and Alice Gladwell, she was the younger of two daughters. From an early age she attended Sidcot School, a Quaker boarding school which helped to form her strong social conscience and faith. She met our father, Michael Saunders, the love of her life, while still in her teens. Shortly after graduating as a physiotherapist and physician respectively they married. And then, with a two year old in tow embarked on their new life in Canada, arriving in Winnipeg in April 1949. They loved their life in Winnipeg and worked tirelessly for the community as they raised their five children.
Leonore was one of a small group who spearheaded the development of the School of Medical Rehabilitation at the University of Manitoba. Her leadership and perseverance were integral to the opening of the school in 1960. The school educates physiotherapists, occupational therapists and respiratory therapists, who continue her legacy of making countless contributions to the health of Manitobans. The Canadian Physiotherapy Association honoured her with a life membership due to her exemplary and sustained contributions to the profession.
She mentored many therapists and in her honour a mentorship award is given yearly by the Manitoba Physiotherapy Association. She did extensive work to improve access to special services for children with disabilities and chaired the committee for the Year of the Disabled in Saskatchewan.
Leonore was also an active member in the Winnipeg community. She was the president of numerous community agencies, a board member of many Winnipeg cultural organizations, and an active volunteer, including for both the 1967 and 1999 Pan Am Games. She enjoyed travelling and adventure, from camping with a family of seven to cruising the seven seas. She was honoured to receive the Order of Manitoba and the Queen's Jubilee Medal in recognition of her community work.
She was predeceased by her husband, Dr. Michael G. Saunders, who died suddenly on his way to a conference in Cleveland, Ohio in 1975 and by her second husband, Hans Roeder, in 2012.
Leonore is survived by her children, Christopher, Gail, Jennifer (Vaclav Honsa), Deborah (Sheldon Wolfenson) and Erica (Alan McLaughlin), and her stepdaughter Edelgard Larsen, her grandchildren, Katya Park (Eugene), Michael Bradshaw (Sharon), Alyssa McMurter (Chris), Erin Bradshaw, Jocelyn Kroschinsky (Brian), Sam McLaughlin (Aveeve), Graham Honsa (Sarah), Roy McLaughlin (Josefina) and Kari Wolfenson (Telmo), her stepgrandchildren, Katrina Larsen (Jason) and OJ Larsen, and her 13 great-grandchildren, Isaac, Kai, Redden, Estelle, Joshua, Matthew, Teo, Rylee, Matthew, Lukas, Claire, Zevi, Leila, and three step great-grandchildren, Alyssa, Tate and Jordan.
The family is deeply grateful to the many caring and compassionate caregivers at Tuxedo Villa, her home for the past year.
A Celebration of Life will be held on January 18, 2020, at 11:00 a.m. at St. George's Anglican Church, 168 Wilton St., Winnipeg.
Flowers are gratefully declined. Donations may be made to the Leonore Saunders Memorial Award at the University of Manitoba, online at: umanitoba.ca/giving or sent to the following address: Alumni and Donor Relations, 200-137 Innovation Drive, University of Manitoba, Winnipeg, MB R3T 6B6. Cheques can be made payable to the University of Manitoba; or to St. George's Anglican Church Memorial Fund, online at: stgeorges.mb.ca/about/stewardship.