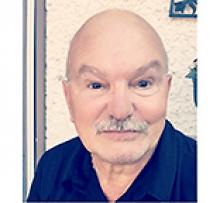 
It is with unsurmountable sadness that we announce the passing of our beloved father, Giuseppe "Joe" Migliaccio, who passed away December 31, 2019, at 66 years of age.
Determined to celebrate another Christmas with his children, in true fighting spirit, Joe would defy all odds after enduring the damage of two consecutively large strokes and fight his way through the holiday season. After a month-long battle in hospital, Joe would ultimately take his final breaths surrounded by loved ones and his three ceaselessly devoted children, Frank, Angie and Maria.
Others left to mourn his passing are his brother Frank and brother-in-law Frank, both of Cortale, Italy; along with brothers-in-law: Gino Mazza (Jenny), Tony Mazza (Phyllis) and Mick Mazza (Stella); in addition to many nieces, nephews, cousins, aunts, uncles and friends, whom all held a special place within his heart.
Joe was predeceased by his loving wife of 42 years, Noreen; who passed suddenly in 2017. The two of them have always shared a bond that is sure to surpass any lifetime. The love they shared brought them immense joy and together they created a family enamoured with an unshakable bond. It is the strength of their love that saw them through many hardships, forming a legacy built from the values of trust, respect, honour and integrity, that will forever carry on with their three children.
Joe was a man built on the principal of strength. He relished the opportunity to defeat all odds, as he would graciously do numerous times throughout his life. He led by example, showing his children that they could achieve anything imaginable and would always be there to help them achieve their goals.
Beginning his life on February 20, 1953, in the small town of Cortale, Italy, Joe was born the youngest of three children. He adored his life in Italy and would remember it fondly through the years. Yet, at the age of 19, Joe would fearlessly leave his family behind in pursuit of his dream of a greater future in Canada; settling in Winnipeg with his cherished aunts and uncles. He met and married Noreen and would work various jobs and open numerous businesses as he tirelessly worked to build a future his family could be proud of. Retiring at the age of 50, Joe spent the next chapter of his life embracing the simple things in life, like a good cup of coffee, time with his family and adding on to his endless collection of watches. Our father is a man that could not possibly be described and the loss of him in this world is unimaginable. The proudest words we (his children) will ever utter is that they are Joe Migliaccio's children, as the legacy he has left behind is paramount and could never be forgotten. We love you Dad and the love you have given us has blessed us for a lifetime. Riposa e pace.
Mass of the Resurrection will be celebrated at Holy Rosary Roman Catholic Church, 510 River Ave. on Friday, January 10, 2020, at 11:00 a.m. Condolences will be offered at 10:00 a.m., Rev. Father Sam Argenziano celebrant. Entombment in Green Acres Cemetery, #1 Hwy. E. at Navin Road. Pallbearers will be brothers-in-law: Gino and Tony; cousins: Joe C., Mick, Frank, Batista and Joe F.; along with nephew Tony. Finally, honorary pallbearer, brother-in-law Mick Mazza.
In lieu of flowers, donations may be made in his memory to the Heart & Stroke Foundation.