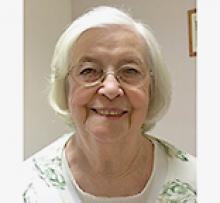 After a lengthy illness, Margaret Goertzen (nee Friesen), formerly from St. Laurent, MB, passed away quietly at Rosewood Lodge in Stonewall, MB, on January 4, 2020, with family by her side.
Margaret was born on September 19, 1931, and received her education in Osler, SK. She married Ben Goertzen on August 19, 1951. In 1956, she moved with her husband and three oldest children to St. Laurent. Upon their retirement from farming and school bus driving in 1995, she and Ben moved to Stonewall, MB.
Margaret is survived by her husband Ben; six children: Henry, Andy, Laurie, Wes, Evie Davis and Lynn Backman; 15 grandchildren; 32 great-grandchildren; and most of her siblings. She was predeceased by her parents, two brothers, two sisters, and several great-grandchildren.
Viewing will take place on Thursday, January 9 from 7:00 p.m. to 8:00 p.m. at New Life Church in Stonewall, MB. Interment will be at Stonewall Cemetery on Friday, January 10 at 11:00 a.m., followed by the memorial service in her honour at 1:00 p.m. at New Life Church. Honorary pallbearers will be Margaret's 15 grandchildren.
In lieu of flowers, donations may be made to Rosewood Lodge.
Thanks to Dr. Graham, as well as the staff at Rosewood Lodge who patiently cared for Margaret for the last four and one half years.