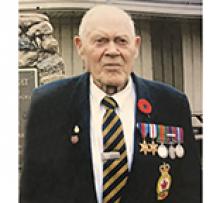 It is with heavy hearts that we announce the passing of Steini Palsson in his 100th year, on January 6, 2020, at the Lundar Personal Care Home, with family at his side.
He was the beloved husband of the late Runa Palsson (nee Barnes, December 28, 2009). Loving father to his children, Joe (Peggy), Betty (Ken) and Patsy (Doug). Proud Afi to his grandchildren, Mike (Lynda), Coreena (Keith), Deb (Dan), Collin (Danielle), Rob (Laura), Brent (Jennifer), Chad (Jennifer) and 14 great-grandchildren. He will be fondly remembered by many nieces and nephews.
Steini was born August 20, 1920 at Stone Lake, Manitoba. He joined the army in 1942 where he served overseas in France with The Queen's Own Cameron Highlanders. He was wounded twice in action which finally sent him home in 1945. Although he received medals for his service, he suffered from the horrors of that war for most of his life.
Returning home in 1945 he married his sweetheart Runa and settled at farming his beloved Purebred Herefords and raising his family. He was a longtime member of the Lundar Bull Sale Committee and enjoyed this annual event right up until his final year.
He had a huge love for hockey. While in the army, Steini played with NHL legend Terry Reardon. He continued to play throughout his life and eventually moved on to coaching the Lundar Oldtimers.
Steini had a special love for country music and his home was always filled with it.
The family would like to give their heartfelt thanks to the staff of the E.M. Crowe Memorial Hospital in Eriksdale, Lundar Personal Care Home and home care for their kind and compassionate care. A special thank you to all of Steini's friends and neighbours who were always there for him.
A Celebration of Life will be held at 2:00 p.m. on Monday, January 13, 2020 at the Lundar Legion with Cindy Thorkelson officiating. Interment will be held in the Lundar Municipal Cemetery followed by a luncheon at the Legion.
In lieu of flowers, the family requests that donations be made to the Lundar Personal Care Home Guild, c/o Judy Gleich, PO Box 60, Lundar, MB R0C 1Y0, or the Royal Canadian Legion # 185 Lundar Branch, PO Box 47, Lundar, MB R0C 1Y0 or to the Lundar Sportsplex c/o Grettir Co-op Inc., PO Box 334, Lundar, MB R0C 1Y0.

He would want to wish us "All the Best".

His Legacy will never be forgotten.