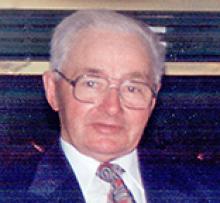 After a long and gratifying life, we are sad to announce the passing of Mike Miller of Matlock, Manitoba. Mike left us on January 2, 2020, at the age of 96.
He leaves behind his sister-in-law Phyllis Milne, brother-in-law Al Penny (Anne Clark), nephew Wayne Miller (Arlene), nephew David Tao (Jane), niece Debbie Rebizant (Ron Alarie), nephews, Barry Penny (Eleanor) and Dwight Penny (Christine), nephews, Doug Milne (Janet), Rick Milne, and niece-in-law Georgia Valentonis. Mike was predeceased by his wife Stella (2013), his brother Reg (2017), and his sister Irene Stevenson.
Mike was born in Teulon, Manitoba on April 26, 1923. He spent most of his years in the Winnipeg Beach area, where he eventually met the love of his life, Stella Penny. In 1944, he and Stella were married and settled into the Matlock area. In his early years, he helped his brother Reg in the trucking business and then worked for many years at Selkirk Lumber. After working for Parks Canada doing yard maintenance at Lower Fort Garry, he retired and enjoyed helping Stella around the yard and spending time with friends and neighbours.
The family would like to extend a special thanks to Denise Pochinko, who spent most of the last two years providing care, attention and support to Mike whenever needed.
A private memorial service has already been held.
If so desired, donations in Mike's name can be made to CancerCare Manitoba or the Humane Society.