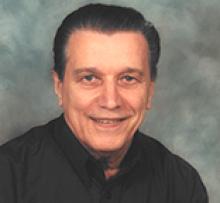 
It is with great sadness that we announce the peaceful passing of our dearest dad with his family by his side.
He is survived by his wife Jean, (nee Buchel), of 58 years; children, Debbie (Dennis) Last, Kevin and Cheryl (Ron) Jeffery; and grandchildren, Mathew, Kellie and Kymberlie. Numerous brothers-in-law, sisters-in-law, and many nephews and nieces. Surviving brothers, Harold (Alice) Timchishen, Tom (Maxine) Walchuk; and sister Jean Grabowski.
Our dad was born in Rosenburg to Anastasia (Nellie) and Kost Timchishen in 1930.
Dad was predeceased by his parents, and his stepdad John Wolchuk; as well as his brothers, John, Joe, Morris; his sisters, Tillie Bird and Ella Marsiniuk; his stepbrothers, Frank, Walter, Joe, Stan Walchuk; his stepsisters, Marie Oleksiw, and Julie Antonie.
Nick attended school in Ledwin. He then went on to Technical College in Saskatchewan to obtain certification as a Laboratory Technician. Nick completed his apprenticeship at Canadian Pacific Railway and continued his career as a Laboratory Supervisor until his retirement in 1991.
Over the years Nick had the opportunity to travel throughout Canada, United States and Australia. He enjoyed camping with his family, Christmases in Florida, and playing cribbage. Nick was gentle, caring, patient and was known for his wittiness and sense of humour.
Funeral Mass will be held on Tuesday, January 14, 2020 at 10:00 a.m. at St. Joseph's Ukrainian Catholic Church, 250 Jefferson Avenue.
Pallbearers are Ivan Werbovetski, Tom Walchuk, Gordon Zinkowski, Ken Harlos, Henry Yeske and Wayne Dunford.
In lieu of flowers, donations can be made to the Heart & Stroke Foundation in memory of Nick.
We would like to express special thanks to the Doctors and caring staff at Grace Hospital.