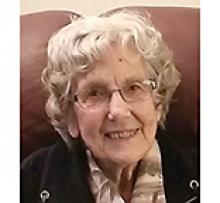 With gratitude for our mother's long life and peaceful death, but with saddened hearts, our family announces her passing at Betel Home in Gimli.
Olive was predeceased by her parents, Fred and Ethel Burkitt, six brothers and three sisters, her husband Albert Campbell and her daughter Janice. She is survived by her son Ken and wife Diane Campbell, daughter Debby and husband Vic Taylor, and son-in- law Jim Burns, along with six grandchildren and eight great-grandchildren.
Mother was born in Halton County, Ontario at her family's home, Lawn Brook Farm. She was her parent's ninth child and the first Canadian born member of her family, a fact which Mom was always proud to note. Mom had wonderful memories of her childhood on the farm and would tell us stories about all her favourite animals, which even included a pet goose. She told us about the fruit pickers and threshing gangs that helped at harvest time and her escapades with her siblings. Life on the farm was lived outdoors and throughout her long life Mother was always happiest in nature.
When Olive was nine years old her family moved out west and settled in Brandon. Mom told us about the excitement she felt on the train trip to Manitoba and her amazement at the conveniences of running water and electricity. But there were hard adjustments to make, and her family suffered during the depression of the 1930s. Mom's teen years were difficult but with the help of her family she completed high school and went on to Normal School for teacher training.
Mom started her teaching career at the age of 18. Her first posting was Aweme School at the historic Criddle Homestead near Brandon. She became fast friends with the Criddle family and had fond memories of her time there. A few years later, when Mom was teaching at Lily Hill school, she went to a district dance where she met her future husband, Al Campbell. They began dating, but soon the war intervened. Dad volunteered and after basic training was sent overseas. It would be five years before he returned.
During the war years, Mom worked at naval service headquarters in Ottawa and did her part to help Canada's war effort. She roomed with some young women from Prince Edward Island and they became fast friends. It was during a visit to Prince Edward Island with them that Mom saw the sea for the first time. Being from the prairies, she was impressed by the lovely sand beaches and huge expanse of the ocean.
When the war ended Dad returned home, our parents were married at St. George's Anglican Church in Brandon, and family life began for Mom. She followed Dad as he moved for work, first to Neepawa when the children were young and later to Winnipeg. After 11 years at home with her children, Mom returned to her teaching career and became a working mother. She taught at rural schools in the Beautiful Plains School Division and later at Cressey and Krawchuk Schools in the Brooklands area of Winnipeg. Those were very busy years for Mom as she juggled the demands of home and family. She worked incredibly long hours without complaint until the family was grown. She retired from teaching at age 60 but, bored with life at home, she took a part time job at Eaton's Department Store. Although Mother never wore more makeup than lipstick, she worked at the cosmetics counter and loved it.
True retirement for Mom came when Dad retired. Together they followed a dream of country life which took them to a log cabin home our father built near Swan River. Once again Mom was able to spend her days outdoors which was a great joy for her. Our parents lived in the country for seven years and their grandchildren have many fond memories of visiting during that time.
When Dad became ill, Mom and Dad chose to move to Gimli in order to be closer to family. Mom faithfully cared for Dad during his illness and after his death she continued to live independently for 21 years. She enjoyed attending her book club and the local seniors centre and made friends with her neighbours at Waterfront. Mother was almost 101 when a fall resulted in a move to Betel Home, where she resided for the last years prior to her death.
Our mother lived through a century of enormous change. She adapted to those changing circumstances with an indomitable spirit and without ever losing her moral values, sense of duty, or integrity. She instilled in her family a love and respect for nature and taught us to appreciate all life's gifts. Mother set us a wonderful example of a life well lived. She was greatly loved and will be greatly missed.